I’m gonna be segmenting my Otakon coverage, partly because the thing as a whole is so massive, and partly because I want the sense of accomplishment from writing an Otakon post tonight without the incredible amount of work it’d take to do it all at once. So first up, I’ll start with the easy stuff: my haul.

Here's all of it together~

I’ll take care of these in the order I purchased them, so here we go~ 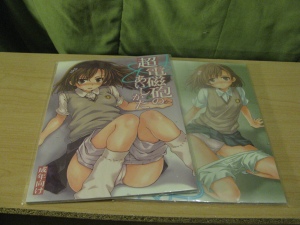 First are the two Misaka Mikoto doujins I picked up from Hen Da Ne, my favorite booth in the universe. In 2008, when I bought my first doujins, I got two good but disappointingly short ones. This year, I made a point to buy doujins that were on the thicker side. The book to the left, called Choudenjihou no Aishikata by Takumi Namuchi, is one that’s been on my Fakku favorites list for about a year and a half, and I knew that it’s pretty lengthy and great. The other was one that I hadn’t seen before but immediately recognized as the same artist, and upon a look-through, found to be excellent.

Also from Hen Da Ne came, sadly, the only Scarlet Devil Mansion-related merchandise I could find at the con. I was desperate for anything with Remilia in or on it, but among the few Touhou figures and merch I found, I had no luck. I expected to at least find some Remilia-centric doujinshi, but got nothing, even having shown up early on the first day of the con. The closest I came was this Sakuya-centric doujin which starts off with some intense Remi-on-Sakuya upon Remi’s bed, and then switches gears into Sakuya-on-China. It’s very nice-looking and has a great air of the Mansion about it, so while I’m sad to not have more, this is still a satisfying purchase. 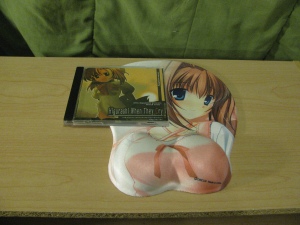 I knew from Friday that I wanted to buy Higurashi, but thanks to Otakon’s screwy ads and maps, it was hard as hell to find the MangaGamer booth, so I couldn’t buy it until Saturday. While it doesn’t bother me too much, Higurashi seems to have been released very cheaply. My copy’s case was missing one of the prongs that holds the cover on, so it comes off whenever I open the case (this only doesn’t bother me because I’ve broken every single CD case I’ve ever owned anyway, so I’m very used to it). The cover slip is just a single sheet of glossy paper and there’s nothing in the case, but hey, I doubt there was any more to the Japanese release regardless (Higurashi wasn’t exactly a professional release, was it?) Anywho, MangaGamer threw in a free oppai mousepad with my purchase, which kicks ass. I’ve never watched any Da Capo, and the mousepad is kind of awesomely bad because, as you can see above, the girl’s right arm is clearly a part of the hump on that side, giving the strange illusion that her left breast is *way* larger than her right. But anyway, so far the mousepad is surprisingly comfortable. MangaGamer also gave me a huge tote bag to carry this stuff in, which was nice, too.

At $130, Good Smile’s Alphard figure takes over Black Rock Shooter’s spot as the most expensive single item in my collection. I went into this con with the intent of buying anything I could find from the following franchises: Raildex, Touhou (with relevance to the Scarlet Devil Mansion), Kara no Kyoukai, Canaan, and Hatsune Miku if I found something I *needed* (I was trying to avoid this, however, because I own enough fucking Miku merch.) I had no luck whatsoever with Rakkyo, and Raildex + SDM only turned up the above doujins, which just left Canaan. Upon finding Alphard, I searched down every last inch of the Dealer’s Room for Canaan, since I knew that if I bought Alphard then I couldn’t afford anything else, and would hate myself if I passed up my favorite character from the series by accident. However, I could find nothing that I wanted more than this incredibly badass Alphard figure, and I also knew that had I bought Canaan first, I’d have been less likely to ever buy Alphard, whereas if I bought Alphard, I’d owe it to myself to eventually buy Canaan (find an image of them together and you’ll understand why having both is the best way to go). Here’s a bunch more images of this sexy beast. 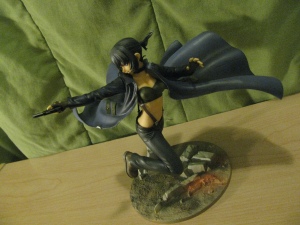 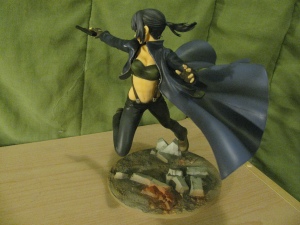 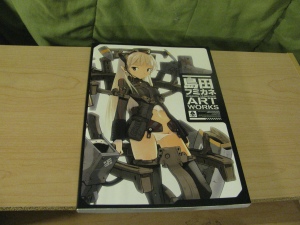 Lastly, we have Shimada Humikane’s Art Works. This caught my eye with it’s attractive mecha musume cover art, and upon opening it, I instantly recognized it as the Strike Witches artbook that Yi of Listless Ink posted about a couple weeks ago. The book is full of many Strike Witches illustrations as well as a plethora of other scantily-clad mecha musume (if you’ll believe it, the Strike Witches girls actually wear more clothes than almost anything else Humikane draws.) All of the art in this book is gorgeous – you can see Yi’s post for a lot of the Strike Witches samples, whereas I just took a picture of one random page that I liked below.

And that did it for me~ Look forward to further Otakon 2010 reports soon!