This is the third post in Digiboy’s Character Database of Love. 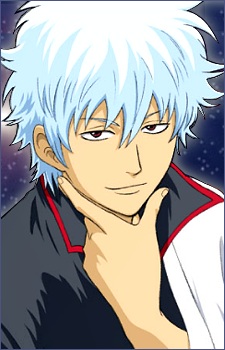 Character Design: (Designed by Takeuchi Shinji, based on designs by Sorachi Hideaki). On an ordinary basis, most of the character designs in Gintama aren’t very attractive – they only become such when the animators decide to make it so. Gintoki is, if nothing else, the most recognizable, and probably the coolest character in the show. He’s known most for his naturally wavy silver hair and the way that he wears his strange outfit (the logic of which is made apparent in an episode where Gintoki explains to Sorachi-sensei that a shounen hero must be recognizable by his silhouette alone). His black-on white clothes with red trim on the black part and blue wavy designs on the white part is a striking and cool outfit that I could see looking good even in real life.

Personal Bias/Moe Traits: Of every character I’ve seen, Gintoki is the one I relate to most (especially since the cast of Gintama is a parallel for my family and friends). For the most part, he’s an irritating guy. He’s lazy, stubborn, disrespectful, mean-spirited, and is trapped somewhere between acting like an old man and a small child. He has an obsession with all things sugary and unhealthy, and his doctor is always warning him about the onset of diabetes – not that it stops him. Gintoki is fully willing to lie and cheat in order to win, an always tries to save his own ass first and foremost.

But even with all that said, Gintoki is still a great guy at heart, and a very reliable friend. When it comes time to get the job done, he gets it done right. He knows how and when to get serious, and he has powerful ideals and codes that he holds himself to. Gintoki is a mentor to several other characters, and there’s no denying that he helps them to grow as people. Kagura and Shinpachi look up to and respect him in spite of his many flaws that they have to put up with, and Kagura in particular tends to pick up all of his traits (good and bad). Watching him and the family of Gintama’s characters, I’m always reminded of my own life.

Distortions of My Imagination: Honestly, Gintama doesn’t leave much to the imagination; not because the characters aren’t intricate enough, but because the show covers everything imaginable in the course of its run. I suppose if there’s one thing I impose on Gintoki, it’s that I create his life more fully to reflect my own. There’s not much that we don’t learn about him, but if I had to fill in the blanks, I’d use myself.

Crowning Moment of Love: There’re no shortage of great Gintoki moments, be they comedic, dramatic, or just heartwarming, but the one that sticks out the most in my mind is from a very early episode; in fact, the moment is actually quite legendary as an introduction to Gintoki’s ways. Towards the end of the episode, and after a long series of funny events, things wind down to a duel between Gintoki and the captain of the Shinsengumi, Kondo Isao.

Gintoki shows up with his usual wooden blade against Kondo’s real katana, and when Kondo asks if he’s trying to make a fool of him, Gintoki says some manly stuff about being able to lay down his own life, but not the life of his opponent. Impressed by him, Kondo tosses his sword aside and asks Shinpachi to throw a wooden sword down to him, but before he can, Gintoki tosses his own sword to Kondo, saying that he’ll let him use his favorite weapon, and then takes Shinpachi’s sword himself. Kondo is moved by his spirit and the duel begins… and when Kondo goes to swing the wooden sword, it suddenly breaks in half. After spectacularly owning Kondo, Gintoki reveals that he’d spent the time before the duel scoring a deep cut into his blade and makes fun of Kondo for accepting a weapon from his enemy. This is so fucked up that even his friends view it as a moral event horizon and lose all faith in him. I, for one, was so impressed that a main character could be such a bastard that I knew he’d become one of my favorites. 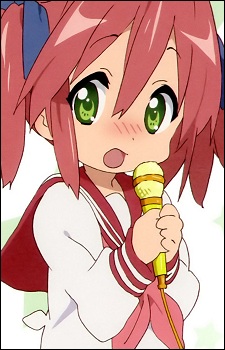 Character Design: (Designed by Horiguchi Yukiko, based on designs by Yoshimizu Kagami). Lucky Star is my second-favorite show for character designs, but my thoughts are usually centered on Kagami, Konata, and Tsukasa. Yutaka is less attractive than them from a sexual standpoint, but she’s ultra-cute to make up for it. Her wide eyes, innocent expression, and even her uniform that seems a bit to big for her combine with her small stature to create a total image of purity moe. I’m not entirely sure how I feel about her hair, because it’s cute, but it’s also really big (and I am an enemy of big hair), however, I think she pulls it off well enough.

Personal Bias/Moe Traits: As Konata puts it, Yutaka is a “walking pillar of moe.” She’s tiny, cute, sickly, innocent, and adorable, which is nothing that I’m opposed to, but at the same time, it’s not ordinarily something that I’d find myself attached to. Actually, Yutaka didn’t leave a big impression on me the first two times I watched Lucky Star, but on my recent rewatch, I grew fond of her. I guess it’s because Yutaka is cute and innocent but never annoying or ignorant. Oblivious-moe is my least favorite kind of moe (with Yui Hirasawa being one notable exception), but Yutaka is smart and fun enough that it works for her. She’s ignorant of many things and a bit naive, but she’s able to understand things once she finds out about them. I think she’s definitely what you’d call a ‘late bloomer,’ but I think she’ll manage to do fine as an adult.

Essentially, then, you could say that I love Yutaka just for being a really cute, smart, and uber-moe loli, and that’s probably as true as it gets. But there’s one more big thing…

Distortions of My Imagination: I want Yutaka to be gay for Iwasaki Minami. The show plays around a lot with the potential misunderstandings about their relationship, especially when their fujoshi manga-ka buddy starts using them as inspirations to draw yuri porn. Sure, Yutaka’s utter desire to be close to Minami at all times could be considered in the vein of your average magical girl’s friendship with anyone, but I think there’s more to it then that, even if it goes over Yutaka’s own head. Yutaka is pretty aggressive about making time to spend with Minami and keeping close to her. I can’t exactly picture Yutaka nor Minami with a guy, but picturing them together is almost too easy. I don’t doubt that Yutaka *does* have the tenacity to initiate a relationship if it seemed to be appropriate, and as for Minami, she seems like the type who’d go with the flow into the situation and manage to be happy with it. They make such a cute couple~

Crowning Moment of Love: I don’t have any single awesome Yutaka moments, but if I had to chose, it’s a scene from later in the series wherein Yutaka asks Hiyori where she gets the inspirations for her manga. (You can watch the clip here). When Hiyori answers that she mostly finds inspiration from personal experience, Yutaka gets embarrassed, revealing that Konata had let her read Hiyori’s yuri manga. She even compliments that the story was quite good. This scene was a little surprising, because I expected the joke on Yutaka’s obliviousness to keep going (well, she does remain oblivious to the fact that the manga’s based on her and Minami). Instead, Yutaka has read the story and enjoyed it, which I felt was the first time that the anime wasn’t treating Yutaka like a child, in a way. It was that scene which convinced me that Yutaka’s relationship with Minami was a real possibility.