Kure-nai is one of my favorite shows and features the best writing of any anime I’ve seen; however, it’s an understandably difficult show to get into, and many of those who watched it back in 2008 strongly disliked it. I’ve read many of the problems people had, and a lot of them make sense, but are also largely based on misunderstandings. Of course, I don’t expect everyone to like the show; I get that we all have different tastes, and especially with an oddball series like this, it’s just not going to click with some people. However, I’d at least like to help your chances by telling you some things that helped me enjoy the show more when I first completed it.

This is my Guide To Enjoying Kure-nai On Your First Try.

I likes what I sees!

1. Know a little about the writer/director.

Kure-nai was written and directed by Matsuo Kou, the man who also wrote and directed Red Garden. Kure-nai is based on a series of light novels (which also have a manga and OVA adaption), but it’s so different from the novels that it may as well be considered Matsuo Kou’s original creation (especially since the novels suck ass.)

Knowing a little about Matsuo Kou may help you to get a better grasp of what the story is going for, and the best way to do so would be to look at Red Garden, which came out around 3 years prior. Red Garden is a strange, artsy show by Gonzo that’s set in New York and styled in the way of classic American films. Matsuo Kou seems to really enjoy old movies and american TV shows (there’re references to Seinfeld and other American sitcoms in Red Garden), and he could be called an artfag – the kind of guy you could imagine attending film festivals and watching IFC all day. Red Garden has random outbursts into song throughout it’s first seven episodes and an oddly structured story that focuses more on character interaction than it’s central plot. It purposefully features flawed and often annoying characters who change into respectable, awesome badasses over the course of the show.

Kure-nai makes a point to combine Kou’s western indie influence with definitive Eastern styles, once again favoring old-school storytelling (but using the moe of Murasaki to ground the series in modern acceptability, which is why it still went over well with otaku.) The presentation is much more like a film than a series, and indeed, it’s best to marathon the show in one or two sittings to get the full effect. The style of dialog is more old-school, and the plot is only important to the story in the ways that it drives character interaction. Therefor, the best mindset to go into with Kure-nai is that you’re about to watch some indie European film, the kind of thing that would be referenced in a Quentin Tarantino film and loved by a cult underground following of film school professors.

1.5. Try not to get squicked out. Just because some other weirdos get off on sweet loli service doesn't mean it has to impede your enjoyment of an adorable and fun series. Just remember that you like it for different reasons.

2. Don’t take the show too seriously, because it isn’t taking itself that seriously.

I remember the first time I watched The Fifth Element; I got surprised because it was a pretty comedic sci-fi epic throughout, but it got so absurd by the end that I felt like I’d gone into it with the wrong mindset – Kure-nai is the same way. The first episode is very slowly paced and serious-seeming, which completely betrays the overall tone of the show. Kure-nai isn’t necessarily a drama nor a comedy, even though it has elements of both. It’s just a story, a telling of events, and it’s only funny or dramatic because the events call for that kind of atmosphere. This is another way that it resembles some indie film, like a lighter Takashi Miike flick or The Taste of Tea, but a little less bizarre.

When first watching Kure-nai, I took it as a mostly serious story with some comedic undertones, but by the fifth episode, I started to get confused about what it was trying to go for. However, episode six (the greatest episode of anime ever) is almost entirely comedy, and features a nearly three-minute random musical outburst scene (the greatest scene in anime history) that made me rethink my expectations for the series. I then restarted the series while catching up to episode eight, and when I did so without thinking of it too seriously or expecting too much from the plot, I found myself able to enjoy and understand it a lot better. It’s true that the show gets more serious towards the end, but at the same time, it is also quite over-the-top, showing once again Kou’s love for indie-styled dramatic setups that focus on creating the atmosphere of a scene instead of worrying about the collective tone of the series. 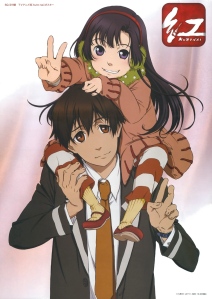 2.5. It helps if you can enjoy the odd artwork. Kurenai and Red Garden are the only two anime wherein the voice acting was recorded first and the animation timed to it, which leads to some interesting results.

3. Know that they aren’t genuinely trying to hide Murasaki.

This is kind of a spoiler, but it’s also a huge deal. Some people called Kure-nai ridiculous because the plot is that a big-name ‘dispute mediator’ kidnaps a young girl from an unbelievably powerful family and leaves her in the hands of the mediator’s youngest and least capable apprentice in order to protect. Now, the original novel series is more of a ridiculous and silly, semi-dramatic comedy that probably got away with this plot because it was a comedy, whereas the anime looks like it’s taking the situation more seriously, and therefor looks stupid for this setup. This is a misunderstanding.

It’s explained later in the series that the dispute mediator, Juuzawa Benika, never intended to permanently hide the girl, Murasaki, mostly because making enemies of the family in question would be suicide. This was a powerful enough family that they could’ve easily tracked her down and murdered/tortured all of her men until they found Murasaki. Benika kidnapped Murasaki because of a promise to her dead mother that she’d let Murasaki experience the outside world and ‘learn about love.’ (This is another spot where the novel is a thorn in the anime’s side, because in the novels, we are meant to take Murasaki’s love for Shinkurou more literally, whereas in the anime, we have to infer that the mother didn’t expect to die when her daughter was only seven, and that Murasaki’s love for Shinkurou isn’t actually romantic.)

Benika has Shinkurou watch Murasaki for both of their sakes. Shinkurou has been begging her to give him bigger responsibilities, and she wants to see what he can do, since she’s trying to raise him as an apprentice. Moreover, she knows that someone younger will be a better companion for Murasaki than someone who’d be too worried about protecting her (as she explains to her top agent, Yayoi, who’s always serious and hates that Benika left Shinkurou in charge of what she perceives as an important mission.)

Benika says outright that she knew they could only hold onto Murasaki for so long, and just wanted to give her a taste of the world until she’d get recaptured by the family. The reason she was able to accomplish this is that she knew Murasaki’s father still had some love and respect for her mother and wouldn’t push too hard to find Murasaki due to his conflicting feelings about the situation. If they’d spent the whole time worried about properly hiding Murasaki (perhaps following Baka-Raptor’s instructions on how to do so properly) they’d be defeating the entire purpose of the mission, which was just to let Murasaki have fun and freedom for a while and then come back with those newfound feelings and ideas.

3.5. Pay attention. Baka-Raptor criticized Murasaki's dispensing relationship advice as beiing unfitting of her age, but the whole point was that she spends all her time watching TV programs that talk about those things, and she doesn't actually understand what she's saying.

4. Don’t take the dialog and actions of the characters at face value.

The characters in Kure-nai are liars and idiots. Ordinarily, anime characters are honest about their feelings, at least to the viewers, but the characters in Kure-nai are more human than that, burying their feelings and thoughts inside so that you have to dig them out. One of the best parts of the series is Shinkurou’s dialog, because he acts like a complete pussy, but unlike your average anime character, you can tell that he’s doing it on purpose. After all, normal people aren’t the kind of idiots that’re blindly polite and easily pussy-whipped because it’s natural to their personality. Shinkurou is clearly troubled by people and uses his politeness and whippedness to avoid conflict and blow people off.

In order to grasp the characters in Kure-nai, you must consider that there’re ulterior motives to the way that they say and do things. Benikawa under-explains the situation on purpose because she wants Shinkurou to assume that his mission is of the utmost importance. The girl who’s always riding Shinkurou’s nuts is aware that he’s a coward and is being polite to try and blow her off, which is why she acts so forceful towards him – you can see it in the moments where someone screws up her game and she shows the other side of her that’s royally pissed. The real money of the dialog, and why I love it so much, isn’t in what’s being said or why it matters to the plot, but about the feelings behind the statements and how they define the characters.

4.5. Give the characters a little time and they'll all win you over. Helps the vocal cast is amazing. Shinkurou is one of my favorite Miyuki Sawashiro performances, which is saying a lot.

Hopefully my advice can help you enjoy the show on your first try, but there’re some things you just have to experience for yourself. If you find yourself getting halfway through and not enjoying it as much as you think you could be, put it on hold, wait a while, and then come back and try again. I can’t force you to finish it or guarantee you’ll still like it, but if you come back to the start with a better idea of what you’re getting yourself into, it could turn your perspective around.

All in all, try to have fun and enjoy yourself. Kure-nai is only thirteen episodes long and can easily be watched in a day or two with it’s easy pacing. It certainly can’t hurt to give it a shot.

I talked about Kuhouin Murasaki in my Character Database of Love

19 thoughts on “How To Watch Kure-nai And Like It”