This is the eighth post in Digiboy’s Character Database of Love.

Character Design: (Designed by Otsuka Mai, based on designs by Yuto.) Hanamaru’s kindergartners look like aliens, but they’re plum adorable anyway. Hii-chan is the best, with her lack of a mouth, solid-colored eyes, steely expression, and ponytail. The real win with Hii-chan is her frequent costume changes, such as the one above where she’s dressed to go on safari. Perhaps her most famous and adorable cosplay is of ‘panda neko’, a cat-panda cartoon character from the anime’s world.

Personal Bias/Moe Traits: I’ve written about why Hii-chan resonates so strongly with me before—essentially, she’s what I want to raise my (future) daughter to be. She’s been raised with a worldliness and understanding that very few children—no, that very few human beings ever achieve, and it’s because of this that she’ll be able to do great things in the future. Her sense of adventure and desire for discovery are magical, and being able to watch her experience the world is something quite touching to me.

Distortions of My Imagination: Am I giving the creators of Hanamaru Kindergarten too much credit? Young genius characters are a dime a dozen, but Hiiragi isn’t like the rest. In her debut episode, she shows a much deeper level of understanding for knowledge than almost any other anime character I’ve seen. But my imagination is what fills in all the blanks, imagining exactly how she must’ve been raised, how her intelligence works, and where I think she’ll go from there. I’m fairly confident in my thoughts on Hiiragi, but I won’t ignore personal accountability for my theories.

Crowning Moment of Love: I want to say it’s something from episode 2 where we learn so much about her, but no single moment sticks out. Instead, I’ll pick out a bit from a later episode wherein each of the girls is stating what they want to do in the future. Hii-chan declares that she wants to be an astronaut, and then details how she’ll have to go to college for ten years, then go through years of training and other things before she can become one. This kind of maturity and passion about how to follow one’s dreams is barely even seen in adults (LOL LIKE ME.)

And now, an entry from guest-writer ghostlightning~ 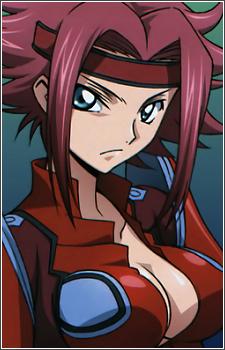 Character Design: (Takahiro Kimura from original design by CLAMP) On one hand I get put off by the CLAMP character designs, but I acknowledge the stylishness of it. On the other hand, Kallen is smoking, smoking hot. Her hair is a genetic gift of her father, along with hot-bloodedness and a natural ability to use palm power attacks with her Knightmare Frame

Personal Bias/Moe Traits: Kallen is a twofer; you get two character presentations for one. You have the demure and utterly fake Kallen Statdfeld, all yamato nadeshiko kind of moe, then you have the hot-blodded angel of loyalty as Zero’s Q1 of the Black Knights. In both cases, I always get to find her half naked coming from the showers. Iknight put it perfectly as 4th-wall moe.

Distortions of My Imagination: Kallen wanted Lelouch to be Zero very early on; she wanted to believe in Lelouch and was attracted to him in a way that’s different from her admiration for Zero. It wouldn’ve been the simplest thing for her to collapse the two people, but Kallen… does not, you know, think a lot.

Lelouch picks Kallen, makes Suzaku dress up as Lelouch, Kallen runs him through with a sword in the parade, becomes Zero. Lelouch and Kallen go around the world in a flying Gurren-Lagann making babies. The end.

Crowning Moment of Love: This is also one of the show’s crowning moments of awesome, period: A frilly yellow dress, a moralfag hypocrite, a 7-hit combo.

Title: Kallen “I have two names, I have two tits. Which between the two do you really care about?” Statdfelt/Kozuki