This is the ninth post in Digiboy’s Character Database of Love.

Character Design: (Designed by Sasaki Masakatsu, based on designs by Kobayashi Ritz). The characters in Saki all have simple, thin designs, which I love and consider a perfect use of the ‘moe aesthetic’. The Koromo is classic adorable loli with interestingly gradient, long, golden locks. I’m not big on her school uniform (don’t like the multi-layered ones) but it’s hardly offensive—Sasaki’s designs are built to look good in just about anything, as most of the characters attest to. The bunny ears seal the cuteness deal.

Personal Bias/Moe Traits: Koromo is the closest thing in anime to Flandre Scarlet, and I was in love with her as soon as I realized this. She’s a cute loli that borders somewhere on the innocent/sadistic line. She’s not easy to place because she’s a genius and, at 18, one of the oldest characters in the bloody show, but her alienation from society has left her a social child.

Every part of her character is fun—there’s the mahjong demon that crushes opponents until they literally give up the game altogether, and then the lonely little girl who’s just realizing how much she always needed a friend. I’m glad that Koromo doesn’t cling to the ‘Ruri-type’ school of ‘genius loli coming out of their shell.’ On the contrary, she’s rambunctious, loud, self-confident, and entertaining, which makes her far more relatable and interesting.

Distortions of My Imagination: I love loopholes, especially if they work. There’s nothing odd about an 18 year-old loli—go to Asia. That’s not my point. It’s the whole innocence and disconnection aspect that must be handled with care if you’re going to try this loophole. Most authors immediately jump for vampires because you can set them at one appearance regardless of their age, and they’re personality is whatever you want, since vampires aren’t real.

Koromo is presented almost like a vampire, but because she isn’t one, a more real psychological element must to come into play. Koromo has a fundamental disconnect from social normality. For one thing, she belongs to an absurdly rich family and would be part of a different society even if she weren’t insane. For another, she’s insane—Koromo’s been locked in a tower by herself for most of her life and everyone’s been afraid of her. She loves playing mahjong more than anything, but everyone she plays against loses their mind.

The reason Koromo works is that she isn’t all cute and innocent, and she isn’t an idiot. Whereas most child geniuses are portrayed as distant, Koromo is portrayed as confident and forthright, which makes a lot more sense, because someone who’s always believed they were the best at what they do would certainly be overt about their opinions on the matter. She seems to be at least a little sadistic beyond the whole ‘when I play, things die’ to the point of ‘hahaha, I play to kill!’ In any case, I feel that this more real-feeling aspect of her character sells the innocent-yet-older loli perhaps better than I’ve ever seen it done elsewhere.

Crowning Moment of Love: TBH, my memories of individual events in Saki are shaky at best. I know I loved Koromo’s super moves, all of her character development scenes, hell, pretty much every moment she was on screen. She pretty much had the same effect as Komoe-sensei from Raildex where every scene she’s in is the best scene in the show.

(And now, an entry from guest-writer ghostlightning.) 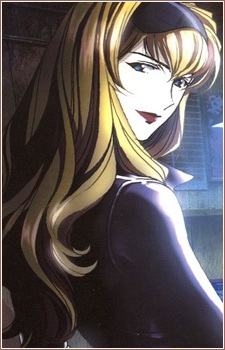 Character Design: (Designed by Toshihiro Kawamoto). I really like the character designs for Cowboy Bebop in that they mostly look like human beings, though prone to long silhouettes; and yet, they’re unmistakably cartoon illustrations. The large ethnic variety in the cast lends to smaller, or squintier eyes among the characters. Faye is Singaporean, which in anime style would have rounder eyes; whereas Julia is Caucasian and blonde, and has squintier eyes.

I generally don’t favor blonde characters, but once and a while there’d be these statuesque goddess-like figures that I’m drawn to despite myself. Julia to me is devastatingly gorgeous and I blame neither Spike nor Vicious for forming their destructive triangle with her.

Personal Bias/Moe Traits: This might sound strange but Julia’s awesomeness in my mind is irrevocably tied to Faye Valentine. Julia makes Faye look cheap and stupid. That short moment they share together is one of the best in the series, showing in only so many seconds the gulf that exists between them as women (relative to Spike). It underscores all of Faye’s problems and foibles — near completely trivial compared to the dramatic sweep of Julia’s and Spike’s. It also serves as a trigger for Faye to consider how Spike was this man she pretended didn’t exist, but is now going away, and it’s all too late for them.

But also, how she’d be an inferior match for him, knowing Julia is Julia, without even knowing who the hell she really is. That’s the Julia effect. She is Sheryl to Faye’s Ranka, and we become moe for Faye as a result.

Distortions of My Imagination: Julia is actually in love with Vicious in a big way. It’s the primary reason she doesn’t leave him, and not because she’s afraid of his reprisals. It’s just that she isn’t actually very good at love, and neither is Vicious. Spike is the one who loves them both more than the two have love for anything in life.

Julia doesn’t die, but instead becomes cryogenically frozen or something like what happened to Faye. She wakes up in Macross Galaxy as an enhanced human, and becomes Sheryl Nome’s manager instead of Grace O’Connor. Yeah, that’s what happens.

Crowning Moment of Love: The car chase with Faye. So short, yet so good. Two hot women shooting guns and avoiding bad guys; and I cannot view them outside the context of doomed love with Spike. It’s a big part too of what makes Cowboy Bepop so compelling to me. Faye takes a message from her… for Spike. What you just saw, and how you’re feeling then, too, is the Julia effect.