Dance in the Vampire Bund was very much a mixed bag, and a confusing one at that. Episodes ranged from interesting to seemingly pointless, and the production quality was all over the place. And yet, that’s easily forgiven because the direction and animation of Shinbo/SHAFT gave it a unique and worthwhile quality that made it a memorable experience. No matter how “flawed” it was, it’s still a show I can see myself rewatching in the future since there’s nothing else quite like it. Plus, it had one of Yuuki Aoi’s best performances to date.

Episode 7 was the first climactic episode in the series, with a second climax occurring in the final two, and for me, 7 was the best episode of the series for the fight between Akira and Mina. I honestly don’t know why they were fighting, as the plot was a convoluted mess that went over my head, but what I do know is that this scene contained everything I love about Shinbo.

As well as everything I hate. In typical Shaft fashion, most of the scene is unfinished. There are missing frames, much like the infamous action scenes in Bakemonogatari, and I’m pretty sure that some of the images were placeholders. (At one point, the scene cuts away to an outside shot of the church for a few seconds, and then in the next shot, the fighters are on the roof, with no transition.) Rather than a fight, what we get is a lot of small, nicely-animated segments bookended by nothing. The whole scene has an awkward flow because of this, and a lot of untimely cuts bring further confusion.

But somehow, the intentions of the scene and the greatness that is there shine through.

If there’s one thing I know about Shinbo, it’s that he adores Christian symbolism, which made up most of the visual style in The SoulTaker back in 2000 and has shown it’s face to varying degrees in everything he’s worked on since. Vampire Bund gave him a chance to return to the big, dark, gothy churches he loves so much.

Tons of stained-glass windows, crosses, and darkness. At the start of the fight, there’s a splendid shot of the three characters’ silhouettes against the stained glass, and a cross blocking transformations from sight. For no particular reason, an old film effect is added, including the sound of a film reel and distorted voices. The shot in combination with the music used reminded me a lot of Kill Bill, or any of Tarantino’s more playful scenes.

The battle, unfinished, is hard to really enjoy, even with cool moments like Akira’s warewolf transformation. Even worse than just being unfinished, a lot of stuff also had to be censored, including the ending bit, which is what made the whole thing so memorable as to be included here.

Akira shields Mina from a gigantic cross that falls down and impales him through the torso, stopping short of Mina, blood dripping from it onto her. Both of them are naked, and just staring into one-another’s eyes, saying some romantic stuff. 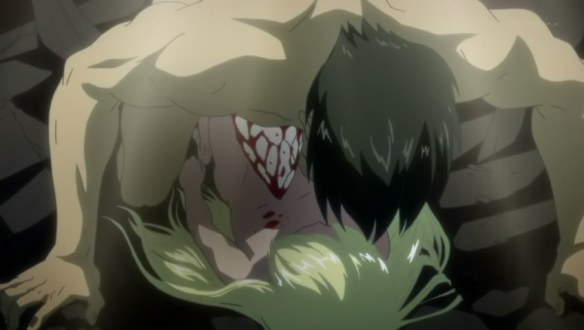 It’s such a perfect scene. As inherently “Shinbo” as a cross through the torso is, he does something interesting with the rest of this moment by not putting any stylish slant on it. Suddenly, the church looks pretty normal, and the characters look very human (or vampire, whatever). It adds to the feeling of naked emotion epitomized in the nude bodies of the two characters. This is a really powerful moment, even if the ridiculous censorship kind of kills it.

Now, for all I’ve talked about the unfinished stuff and the censorship, there are, of course, blu-ray rips out now. The 1080p rips even have audio commentary for every episode (I doubt the commentary is subbed, though), and I’d download them now, but they total up to 23 fucking gigs, which I can’t spare right now for something I’m not about to rewatch. I’m sure this scene will be much better on the BD, but for now, this was how I experienced the moment in 2010.

Come back tomorrow to watch me unwrap my next gift!

Bonus: The things that Yuuki Aoi has said about her role as Mina Tepes are absolutely fascinating. There’s a definitive sense that she understands this character perfectly. I definitely recommend Hashihime’s’ translated interviews with her on Bund.

Seiyuu Yuuki Aoi on Mina Tepes and on Men

Yuuki Aoi — Role of Mina Tepes “The Pride of My Life”

I also want to give a shoutout to Bund having easily one of the year’s best OPs.

6 thoughts on “On the Fourth Day of Kurisumasu My Imouto Gave to Me: Shinboliciousness From Dance in the Vampire Bund Episode 7”