As I’m sure you know, I’m very passionate about karaoke (if you don’t know, please familiarize yourself with these videos~). Being as K-On!! was one of the best shows of the year and was a show about music with a number of really good opening and ending themes (even some great B-sides!), it seems like perfect karaoke material.

Or it would, were the songs not insanely difficult to sing. I pride myself on being exceptional at singing fast and complex songs—last Otakon, I did Shounen Heart, a rap song by Home Made Kazoku from Eueka Seven, almost without error (and those errors aren’t made all the time). But K-On’s music is a whole level above that.

The difficulties are marked by a few factors that carry across all of the songs, leading me to believe that the style was done on purpose. The vocal rhythms are very erratic and lyrics are often squished together to fit the rhythm. For instance, let’s say there was a 5-syllable line; this line may have only 5 syllables of lyrics in one verse, but in the next verse, there could be 8 syllables of lyrics, 5 of which are sung, and the other 3 of which are either squeezed-in or skipped altogether.

Whereas most Japanese songs pronounce every syllable individually, K-On songs will cut a letter off of one syllable and then sometimes combine that syllable with the next word. For example:

The second line in No, Thank You is “Rakugaki jiyuu na negaigoto”

However, rather than “Ra-ku-ga-ki,” Mio (as I’ll refer to her) sings “Ra-ku-gak”. The “i” is flung off into the void and the word becomes three syllables.

Moreover, there’s no pause before the next word, so it sounds “Rakugakjiyuu”.

Another issue with reading the lyrics is that sometimes two vowel sounds are combined, and other times they aren’t. This isn’t uncommon to Japanese songs from my experience, but it’s still a pain in the ass when combined with the other difficulties.

However, the line “Omoide hitaru otona no you na kanbi na zeitaku” is sung “O-moi-de-hi-tar o-to-na no you na, ka-n-bi na zei-tak.” In this case, the “moi” in “omoide” is one sylable instead of “mo-i,” which is extra confusing because at the beginning of the chorus, the same word is pronounced in 4 separate-sounding syllables. This line also has the word-combo issue (“Omoidehitar,” which also has a dropped-off letter at the end), and more combos in the form of “you” and “zei,” with “zeitak” also having dropped the u. 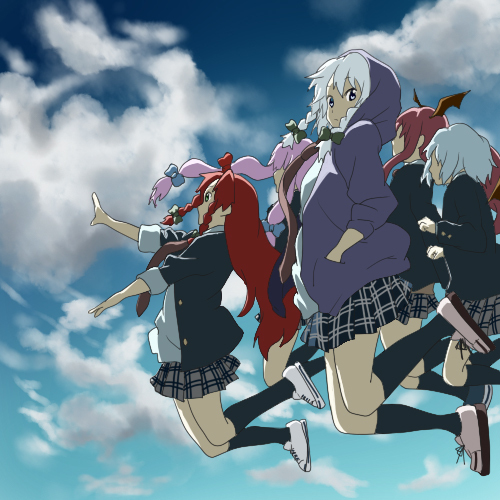 Another notable aspect is that the English words in these songs are pronounced more like they actually are in English. In a lot of Japanese songs, English words get broken down into syllables like Japanese words, and sound nothing like the originals.

My favorite example of this is in Zetsubou Billy by Maximum the Hormone, which features the words “Eraser Rain” in the chorus, pronounced “I-re-i-sa rein.” The funniest part comes at the end of the song when the lines are sung “I-re-i-sa reeeeein — i-sa rein.” For dramatic effect, the word was broken in half. I don’t even know how to translate the broken half back into English.

In K-On songs, there are as many syllables in the English words as there are in English, but that doesn’t mean the pronunciation is right. In No, Thank You, the word “world” is used; in most Japanese songs, this would appear as “waado” or “warudo” (you know, as in ZA WARUDO). In No, Thank You, it appears simply as “waad.”

All of these elements add up to some really difficult karaoke, and in the case of GO! GO! MANIAC, I still haven’t even grasped the lyrics enough to figure out how to sing them. However, I used this knowledge to modify the lyrics to No, Thank You, and produced something much easier to sing.

In my version, I cut out all unpronounced letters and used hyphens to indicate where there’s no pause between two words, and em-dashes (—) to indicate where there are gaps within a word. In one place, I changed a romaji-version of an English word into the English word, because it was confusing to see “cauntodaun” (7 syllables if you count the Ns individually, 5 otherwise) when it’s pronounced in two syllables in the song. As for the alternating places were vowels are or aren’t separated, there wasn’t much I could do about it, so you’d just have to know the song well enough to know what to pronounce. 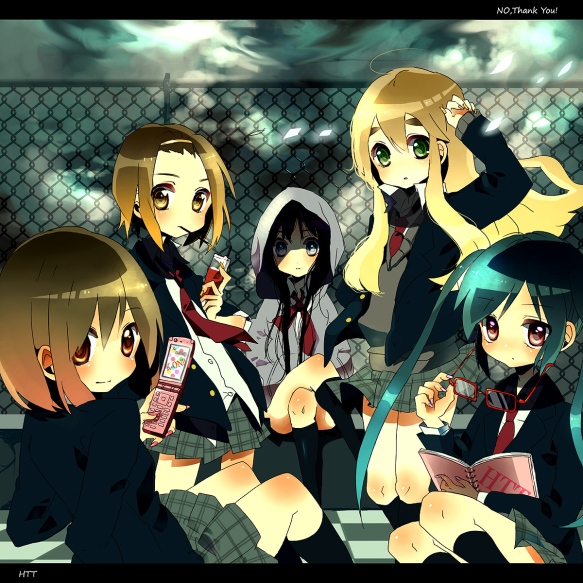 No, Thank You! Modified

See you at the next karaoke event!

Bonus: May as well practice! (Note: the lyrics on this vid aren’t my version, though.)

5 thoughts on “Trying To Make K-On!! Songs Easier To Sing”