This is the eleventh post in Digiboy’s Character Database of Love.

Character Design: (Designed by Tanaka Yuichi, based on designs by Haimura Kiyotaka). Komoe-sensei is 135 centimeters tall, which is equivalent to about 4.5 feet; legally, this makes her a midget. Most people mistake her for an elementary school kid, which she resents in spite of doing everything to reinforce that misconception. She wears the kinds of cute dresses that most girls are desperate to grow out of, and at home she wears pink bunny pajamas with ears and everything.

However, make no mistake; Komoe-sensei is pushing 30. Even though she’s so small that she has to stand on a box to talk at a podium and has a hard time driving, she’s a hardcore smoker and drinker, her apartment resembling that of a 23 year-old guy.

Personal Bias/Moe Traits: This doesn’t even need to be discussed. If I were to describe the perfect woman, I’d say that she should be older than me yet have a tiny body, be a smoker/drinker, and be both laid-back and adorable. Boom. Komoe-sensei is, beyond a shadow of a doubt, my number-one waifu. And that voice—the way she says “desu” makes me blush it’s so damn cute.

Distortions of My Imagination: Dear god, what could I even add to this? How do I imagine a perfect character being anything other than herself? I guess what I could do is imagine that she has a stronger cool side, but then if she’s too cool I probably can’t handle her (always my fear about Nobue). Really, she’s just perfect.

Crowning Moment of Love: Every time she’s on screen. But most importantly, the first half of Index episode 3, which is one of my favorite scenes in anime history, and stars Komoe-sensei. “Kawaii tenshi… kawaii tenshi…”

And now, from special guest-writer ghostlightning: 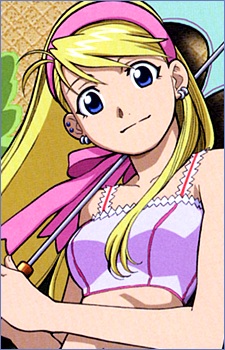 Character Design: (Designed by Kanno Hiroki, based on designs by Arakawa Hiromu) I didn’t warm up to the roundish character designs of FMA immediately. I did eventually, and I think it coincides perfectly in the third cour, precisely when the third ED is introduced. As I mentioned in my write-up for Julia, I’m not one for blondes. So Winry already has 2 things going against her. But it didn’t matter. After that ED I was in it to win it.

Personal Bias/Moe Traits: I don’t really care much beyond the fact that I think Winry is a good person, that honors her parents legacy superbly, and her grandmother’s as well. She isn’t stupid, though she made naive mistakes that compromised the Elric brothers’ operation up North. Otherwise, she made thoughtful, wise, and courageous judgments. Her moment of glory being how she spoke to Scar when she had him at her mercy.

All those things considered, I like Winry mostly because she looks the way she does.

Distortions of My Imagination: Winry is afraid of confronting the guilt of being an automail mechanic in a shrinking market. In a time of peace there will be less lost limbs. Why should she be in the business of military prosthetics? She needs to transition automails from prosthetic replacements to non-replacement extensions for performance enhancements in an industrial capacity.

Since she got the ending I thought was perfect for her, there’s little space for me to distort things… maybe I would’ve enjoyed an ep or an omake-like thing wherein she fusses about her clothes not fitting her anymore… I should stop. Now.