This is all part of growing up, I guess.

Let’s leave aside how the setup of Rin and then Kouki’s mom getting sick in the last two episodes of Usagi Drop was an excellent showcase of how good a couple Daikichi and Kouki’s mom make. True as that may be, it has nothing to do with why they helped one-another. They did so because they’re both good-natured, kind people who know how to take care of others, and who seize opportunities to help. 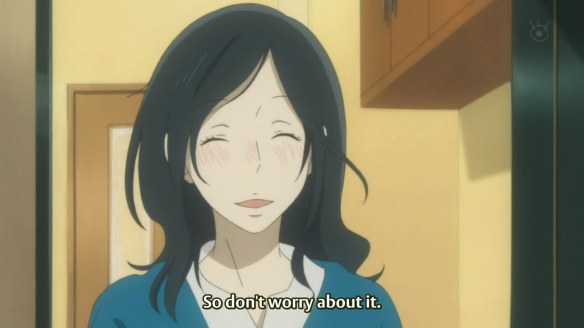 I was childish for seeing myself this way, but I haven’t thought of myself as a nice person. I’ve always had a bitter, calculating attitude about what I say to others when they’re in trouble. I’ve been withholding my sympathy or simply denying it to myself.

When some kind of natural disaster strikes, you wouldn’t see me praying or wishing well on twitter or facebook, and you wouldn’t see me rushing to donate money to some relief fund. I don’t see myself as charitable—I see myself as self-absorbed and callous. The kind of guy who lies and cheats to get what I want, who ignores the problems of others and worries about my own. Maybe this is all just running away. Or maybe, really, it’s that I feel like I can’t do anything in the first place, so this is how I cover it up. I say that I don’t care about donating to charity, but then it’s not like I’ve got any cash on-hand to begin with. When the people at the grocery store ask if I want to donate a dollar to whatever, I always say yes, so it’s not like I’m somehow opposed to charity.

None of that really matters anymore, because my way of thinking has changed.

About 5 days ago, my mom was hospitalized with what has now been identified as Stage 4 Burkitt’s Lymphoma (tl;dr: cancer). I’ve been in and out of the hospital all week along with my brothers, my dad, and, importantly, a whole ton of other people.

My dad felt it was important to make public what my mom was going through, so he’s talked about it on facebook and told others about it. At first, my attitude about sympathy, especially towards myself, lead me not to do the same. After all, none of the people I know online know who my mom is, so why go around making some sob story about my life? But I learned quickly how stupid and silly that idea is, which is why I’ve started sharing it now.

My dad has a boss whom he looks up to and gets along with in a way very similar to how I am with ghostlightning. My dad’s boss had cancer before and was told that he wouldn’t live for more than a month by one doctor, before another doctor told him there was a chance he could beat it—and he kicked its ass. To this day he’s out running triathlons and shit, so he’s kind of a badass. He advise my dad thusly: “tons of people are going to come and say, ‘can I do anything to help?’ Let them. The fact is, people like to help, and when you don’t let them, you’re just hurting their feelings.”

The idea that people help others because it makes them feel good is interesting, isn’t it? It can sound pessimistic if you put the wrong twist on it, but really, it’s pretty fucking awesome. “I love you because I love myself.” That’s a hell of a good way to live, if you ask me.

Had his boss not given him that advice, my dad knew he would’ve instinctively told everyone, “no, it’s fine, you don’t need to do anything.” Now both of us recognize how foolish that would’ve been.

Nevermind that all kinds of people have come to the hospital to hang out and chat and have fun (yes, FUN), but people have brought food and gifts; one of my dad’s friends came and mowed the lawn since we didn’t have time, being at the hospital for days; someone picked up my dad’s dry cleaning—it sounds a little funny, but it means he doesn’t have to leave my mom alone in the hospital, which is the last thing we want to happen. We want her surrounded by people and fun and kindness so that she won’t get scared, and will always keep positive.

I’ve met people my parents are friends with whom I’d never met before, and seen some that I hadn’t seen in years. This is awesome. These are cool people. This has been fun.

Wow. So that’s what it means, huh? This whole caring thing? This kindness thing? I never knew. Maybe because I’m just now an adult. 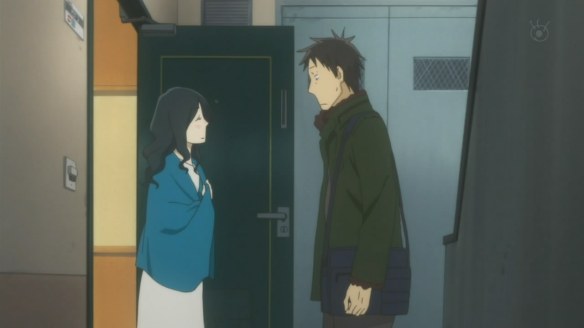 I probably could’ve selected from a whole bunch of anime that show people being nice to one-another, but Usagi Drop is a grown-up series that I think really shows what I’m talking about (and I happen to have just finished it). It’s a show wherein adults are shown to be helpful, kind folks—a lot of them, too. It’s not that Usagi Drop is optimistic, it’s just true to life. People are fucking great, they really are. It’s not like there’s nothing wrong with the characters in this show, nor with the people who are coming to visit my mom, but does that even matter? I fucking love all of them anyway.

And I love all of you, too, which is why I’m saying this now. Thank you so much for everything, whatever it is. If you ever need anything from me, just ask.

20 thoughts on “Diary of Usagi Drop Lived – Kindness is Real”