Ugh, I should’ve made posts on Ben-to 4 and Fate/Zero 5 this week, but I’ve been lazy about blogging altogether and also that NaNoWriMo things is happening. On that note, you can read my story as I write it over at talesfromthe711.tumblr.com. It’s a series of short stories involving 7-Eleven convenience stores. Meanwhile, omo has been doing great posts on those shows, although not covering what I want to. 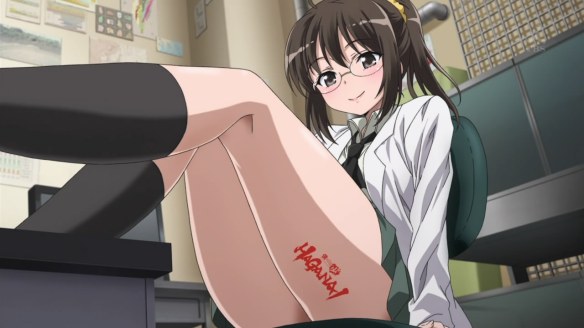 Boku wa Tomodachi ga Sukunai gets better every week, proportional to its gain in characters. Watching episode five with a friend was a great idea and I can honestly say I enjoyed this week’s episode. Not that I suddenly think the show is “good” or anything, but here’s where it gets weird: I mostly enjoy this show for the voice acting.

This isn’t new or anything—I’ve been a seiyuufag for a while now, and I know I wouldn’t have made it through Nekogami Yaoyorozu had the voice acting not been phenomenal, but in this case, it’s like I’m only watching Haganai for the seiyuu. While I enjoy looking at the character designs, I don’t care much for how AIC Build animates them. I do find Kashiwazaki Sena to be a fascinating character, but even that has a lot to do with how Itou Kanae portrays her.

I consider this weird because I can’t even understand Japanese. Obviously my comprehension of it is pretty good for me to even take note of acting, but I don’t have the skills to watch anime raw unless it’s a show for five year-old girls. It feels strange to say that I’m enjoying a show primarily because of the way people sound speaking a language I barely understand.

But oh my god, Hanazawa Kana gives new meaning to the word moe playing Hasegawa Kobato. I’ve become a complete fanboy of Hanakana in the past year. Falling for her last December feels as long ago as it’s been, and I’ve loved her as Sakuya from .hack//QUANTUM, Nessa from Fractale (YES I LOVE HER, EAT A DICK ALL OF YOU), Gokou Ruri from Oreimo (which I didn’t see the OVAs of until recently), Mitarai Fumika in Seikon no Qwaser, Shiina Mayuri in Stenis;Gate, fuck it, I’ve loved every single time I got to hear her voice this year, even if I dropped her show right after she was introduced. Kobato is like a combination of Kuroneko and Mayuri, but in the most loli pitch that she’s ever used, and it’s perfection. The best of everything that is HanaKana. 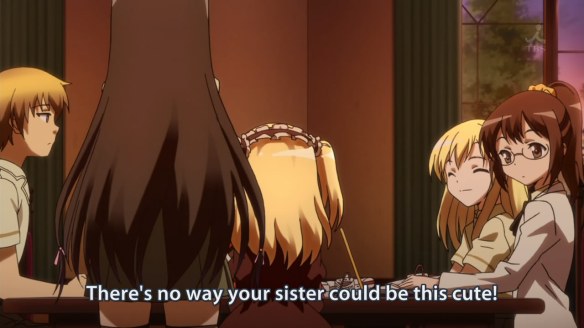 It’s funny how HanaKana obviously got her role because of her performance as Kuroneko, which was indirectly referenced in episode five (“your little sister can’t possibly be that cute!”), because the same thing is true of Iguchi Yuka playing Takayama Maria. Here’s a character that’s a loli nun with silver hair and a very childish attitude—the show even throws it in your face that she’s Index in episode five by giving her a white robe in the video game world and having Kodaka say, “I swear I’ve seen that outfit before…” Unlike HanaKana, whose Kobato is a unique voice from her, Iguchi Yuka sounds exactly like Index here. The reason I find this funny is that the show doesn’t always make such obvious seiyuu choices.

Most fascinating is the choice of Itou Kanae as Sena, which is one I never would’ve thought of, but turned out to be perfect. I see Itou Kanae as a character actor for a character that is inimitably hers. The personalities of Matsumae Ohana (Hanasaku Iroha), Hinamori Amu (Shugo Chara), Saten Ruiko (Railgun), and even some of her minor characters, like Itou Wakana (Sacred Seven), are very similar, but somehow only similar to one-another. They’re all these headstrong girls that you can read like an open book, taking on their problems by rushing at them and getting emotionally involved. (Itou has played plenty of roles that don’t fit this mold, such as Elsie from KamiNomi, Eris from Asobi ni Iku yo, and Akai Ringo from Ookamisan, for which she uses a high-pitched, cutesy voice.)

Sena doesn’t look like the classic Itou Kanae character—after all, the four examples I listed above are all skinny, medium-height girls with tiny breasts. Sena is taller and bustier than all of them, a character who stands out more as a “beauty” than any of the others (save maybe Ohana). This is part of her character’s intrigue—the idea is that she looks like a beautiful ojou-sama type, but isn’t like that whatsoever. Were she a bit bossy, abrasive, and tsundere, then Sena would still fit the ojou-sama mold; but she breaks it quite thoroughly. She’s actually a really nice, likable person with a good personality who manages to get very passionate about things once she gets into them. It just happens that she’s socially awkward and ends up making a terrible choice in friends. Really, Sena doesn’t have any personality issues like the rest of the club—she’s kind of their victim.

By the way, I do consider Kodaka to have personality issues, such as what I covered in episode three. He’s actually lukewarm in a way that I chalk up less to being a generic harem show protagonist, and more to being a genuinely lukewarm and unlikable person. At least he falls in with the strange seiyuu choices, though: of all the popular lukewarm protagonist voices out and about, Kimura Ryohei isn’t one of them.

Likewise, Inoue Marina isn’t who I’d expect to hear as the intensely bitchy Yozora. What landed her this role? My best guess is Chiri from Sayonara Zetsubou Sensei. To be fair, Inoue’s catalog is so diverse, it’s not like I would have some other expectation of a character for her, but when I think of a character like Yozora, I expect Hikasa Youko or something. Which, honestly, thank god she isn’t! I’m fucking sick of her!

Shiguma Rika is in a similar boat; I don’t even know who I’d expect to be voicing her, but I barely even know about Fukuen Misato, and am now realizing that this is a huge mistake. Oddly, the role that stands out in her library for me is Mikajima Saki from Durarara whom I remember having one of the hottest voices ever, and I was always wishing she’d have more dialog. None of her other roles are hot like that from what I’ve seen but Shiguma Rika is certainly in that boat. It’s not easy, IMO, for a seiyuu to say a bunch of lewd, shock-value things and for it to come across as hot instead of forced. I mean, look at this show! The scenes of that nature involving Sena and Yozora were absolutely terrible, but when Rika does it, I melt. Of course it’s all the better when the character enjoys it.

Who does that leave? Oh yeah, Yukimura. Yeah, nobody gives a fuck about her.