Early into the start Tera, people marveled at the sweeping landscapes, the unfinished areas that they could find a way into by jumping over mountains, and the giant sky-whale flying around the border of Val Aureum. You can find videos of people chasing these worldly wonders, and I’m certainly not the first person to take a hell of a lot of Tera screen shots. Nonetheless, I felt the need to take this journey myself, and to take my own screen shots, for my own memories. 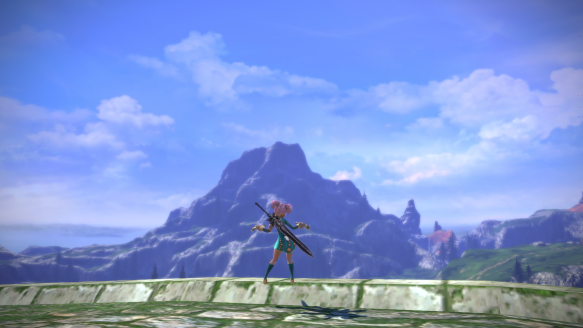 My journey began began because I was bored (like any great journey). I found myself standing on the outer rim of Velika, waving at the gigantic mountain on the other side of the valley, intending to then climb it and wave back at the city.

Which I did. Reaching the top of that mountain wasn’t as simple as I’d thought. There’s never a direct way to climb the mountains in this game, but barring the occasional invisible wall, you can usually find a way. Upon reaching the summit, I realized just how god damn huge this mountain was, and decided to have a look in all directions.

I never get tired of staring at Velika. It’s probably my favorite city in any video game. The rainbow arcing behind it is like a beautiful bonus for those who seek to view the city from above. Who wouldn’t want this as their wallpaper?!

Off to the right, I could see the red mountains of Val Aureum. That building-like structure should be the outer wall of Tenebrous Mines, which contains a giant mech-like device within. (I won’t see it on this journey, but here’s what it looks like.) Seeing that it looked so small put into perspective just how high up I was.

To the left, I could see out over the Celestial Hills and the deep green Tuwangi Mire. The fields beyond that are most likely the Valley of Titans. I’m not sure yet what those mountains in the very-far distance are, but I’d love to find out.

Then I just short of killed myself jumping off the mountain. (You’ll notice I now ride a Vanarch mount. I’ve joined Loli Brigade in the time since my last post.)

I decided to head over to the mountains in Freeholds and climb those to see what kind of view I’d get—when suddenly, in the distance, I spotted the famous Sky Whale.

The Sky Whale was too fast to keep up with, and the Freeholds mountains were proving a difficult climb. I took this shot thinking I wouldn’t make it farther up the mountain. 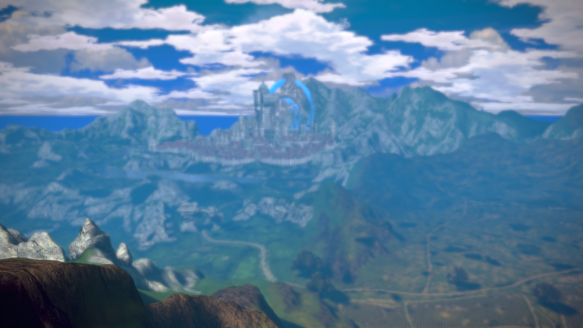 But I found my way to the top, and got to see beautiful Velika from a new angle (though it looks like the background wasn’t fully loaded).

As I turned around for another shot, there it was! It looked to be flying just at the end of this mountain range. I thought, if I can cross these mountains all the way around the Colossal Ruins, I can see that bad boy up close. By the way, I’m pretty sure that structure in front of me is the same one that I pointed out from atop the Velika mountain. 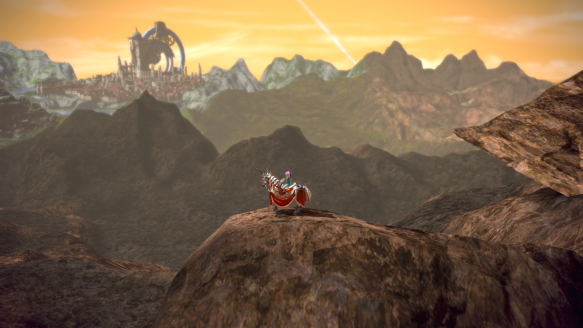 On the way, I stopped to take the most majestic screen shot of all time.

I’d waited around for a while on the hills of Colossal Ruins, hoping to get another look at how far down the mountain pass the Sky Whale was flying.

I discovered that the whale flies out about a thousand meters over the ocean, turns around very slowly, and then goes back the way it came. Also, I’m standing on thin air here. At this point, I was really getting into areas that I shouldn’t have been, with more invisible walls and weird, invisible ledges showing up. Also, the ocean just kind of stops.

As I was rounding the very end of the mountain pass, the whale was getting far ahead of me. Still, I could see that further ahead, it was passing very close to the mountains. (Screen is red because I took assloads of fall damage.) 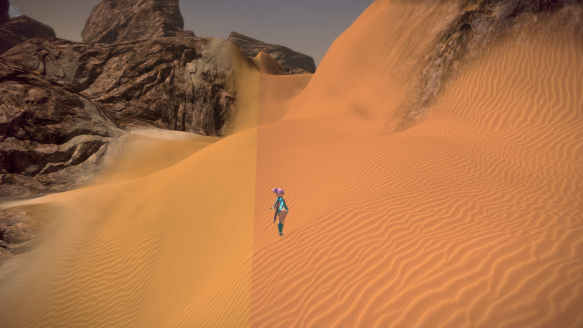 I followed the mountains all the way to the incredibly evident border between Colossal Ruins and Aurum Road. I wanted to proceed further and climb higher up this mountain, but unfortunately, this was the farthest point I could reach. There were a bunch of invisible walls blocking most of the routes up. Even in the water, there was an invisible wall barring entry to Aurum Road. So I stood on a cliff and waited. 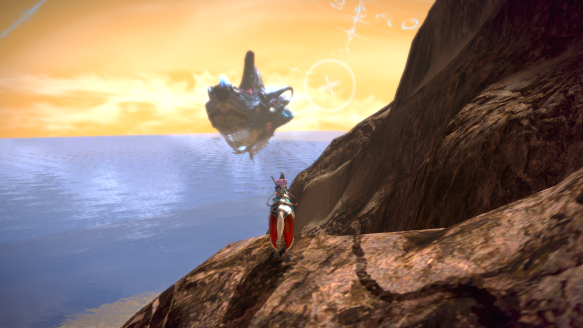 Lucky for me, I was just in the right place to see the whale up close.

Just look at that bad boy! I think I need to put on some Gojira.

I used the unstuck feature to port myself to Tulufan, and was surprised to find that the whale was still visible! (For anyone having a hard time following my location, here’s a map of where I’ve traveled following the Sky Whale.)

I ran outside Tulufan to get a better view of it, and after watching it for a bit, I started to wonder if I might be able to track it to its other turning point.

I wanted to see if the whale would fly down the entire coast of Val Aureum, so I’d just need to buy a teleport scroll to Dark Cathedral from the specialty store and… 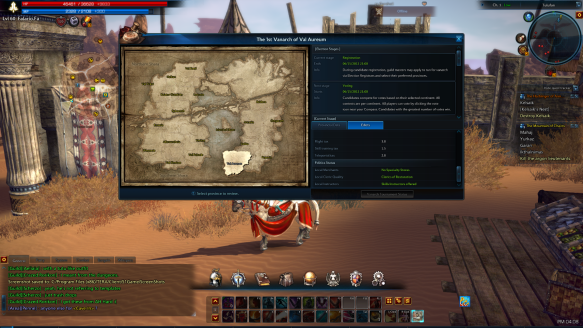 Wouldn’t you know it, the fucking Vanarch of Val Aureum hasn’t turned on the specialty stores!!! Of course, thanks to the brilliant power of hindsight, I realize I didn’t need a scroll to teleport to Dark Cathedral, because Dark Cathedral isn’t a dungeon. I could’ve just used the teleport master and reached a camp right outside of the place. But I was being stupid at the time, and decided instead to take another route. 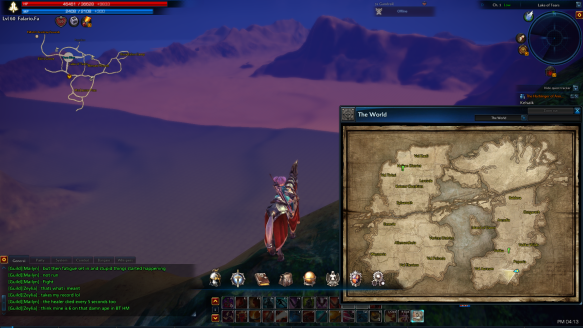 I flew to Pora Elinu and decided to see if I could climb the mountains into the unmarked area on the map, then follow the coast there back into Aurum Road. I was surprised by what I found. 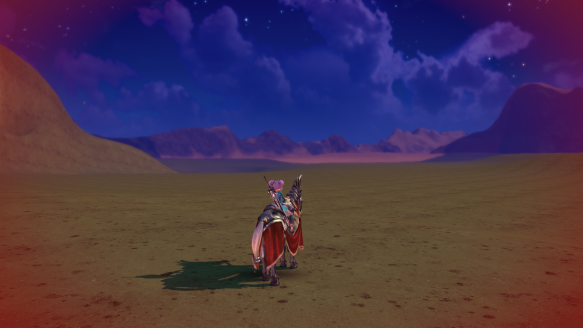 The unfinished area is currently just a big, flat, empty desert, with mountains on all sides.

Once I ran a certain distance, the night sky of Poporia suddenly vanished, and the bright desert sun of Val Aureum came shining through. (This happened instantaneously.)

Once I reached the southern mountains, I found the predictably unfinished coast line, which empties not into water, but into the sky. I also noticed an errant piece of the sun-rune-thing shooting out from under the hills.

Here, I spotted my adventure’s visual constant, the Tenebrous Mines structure, in the distance. I also noticed that every time I moved a step to the left or right, the sun would move about an inch up or down on the horizon. 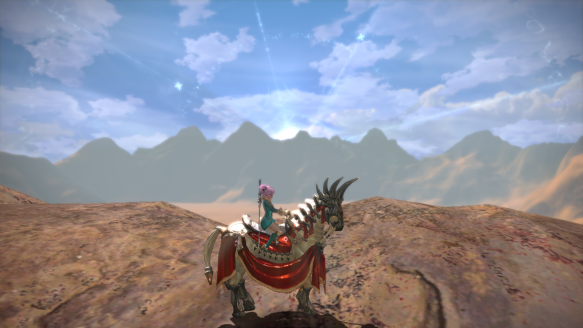 Here, only ten meters from the last shot, the sun is suddenly much lower in the sky.

Unfortunately, while exploring the sun phenomenon, I fell down a hole. I tried all I could, but there was no way to get back up.

From down there, the sun was acting particularly strange.

The sky and it’s rapidly-moving clouds were quite nice. (Just ignore the errant sun ray.)

From this position, it looked like I was playing a side-scrolling platformer.

Before unstuck-ing myself out of the hole, I took some time to make a new site header. I was down there for quite a while, and predictably saw no sign of the Sky Whale. Because I’d been at it for an hour and a half and was getting seriously tired, this was how my quest for Moby Dick came to an end. I’m still curious about his second turn-around point, but for now, I’ll just assume it’s the south end of Val Aureum.

For more of my writing about Tera:

I Love My Pink Gay Elf