END_OF_DOCUMENT_TOKEN_TO_BE_REPLACED

This might seem weird because c2switch probably doesn’t know me, and I didn’t know of her until two days ago, when Akira wrote this magnificent post about having two entirely separate encounters with her, as part of the blog carnival I posted in yesterday.

Like Akira, I’m good friends with 2DT, so knowing that c2switch is one of his friends, I became interested in who this person was, and checked out her twitter. Through that, I was linked to her pixiv account, and I saw something…

This looks familiar—in fact, I know I saw this less than a week ago on tumblr. Yeah, it was in the stream of c-221, one of the first people I ever followed. c-221 only posts maybe once a year—usually five images at a time—and I always forget that I’m still following her until something shows up in my feed. But I follow very few tumblrs, and even less artist tumblrs, so why do I follow this particular one?

Because two years ago, I tried to organize 4chan’s /a/ board to create a doujinshi based on the character Bikko, created by Romantic Fool (who is probably best known as the character designer for Izuna: Legend of the Unemployed Ninja). Bikko was from a one-volume manga that is impossible to find, despite her design having achieved popularity in art circles and inspired tons of fan art.

A lot of people expressed interest in the project, and hung out in my IRC channel waiting for status updates—but in the end it came down to two things: my writing a script, and securing an artist who would actually draw it. That’s where c2switch comes in. She offered to draw the manga, and since I was impressed with her sketches on tumblr, I thought that would be awesome.

her sketches on tumblr

Out of the fifty pages that I planned, I only ever wrote seven of them—and of those seven, I only storyboarded (i.e. drew terrible sketches of how I invisioned) three of them. I emailed them to c2switch, and she said that she was working on them, but I never saw any of her drawings, and I never ended up making more storyboards to send her. This was how the project died.

But yeah, it was very surprising to see that someone whom I’d always thought of as, “this random artist I spoke to once and was never really able to get in contact with again,” was actually friends with my friends now.

It really is a small world and community!

(this reminds me of episode 20 of My Little Pony, with c2switch as Rainbow Dash)

Of the great pickings this season, the show that’s caught my attention, and that I feel I may actually watch all the way through, is Tsuritama, a low-key show about a bunch of awkward, cute boys learning to fish. Or something.

Here’s a fun fact: Enoshima, the town in which Tsuritama takes place, is fucking tiny. Episode one showed random locations in the city, and lots of mention is made of the fact that the show takes place there (“Enoshima don!”), but I got the best sense of what kind of town it is by looking at it on google maps. (click to enlarge)

My neighborhood is bigger than Enoshima island. The average SM mall in the Philippines could barely fit on that thing (and artificial island Mall of Asia is actually bigger). Norfolk international airport, which is near my house and is the smallest airport I’ve ever seen, is the size of the whole above screenshot.

I don’t have a point to make about this; I just find it interesting.

Nakamura Kenji is one of my favorite directors, but Tsuritama isn’t like his other shows. Kuuchuu Buranko, Mononoke, and C were a lot more artsy and visually extravagant. Tsuritama nevertheless stands out with its bright and vibrant color palette, which it shares with Kuuchuu Buranko, along with the character design of Irabu-sensei (here seen morphed into the vaguely malicious Coco).

I don’t mind that Tsuritama is less artsy, because the reason I love Nakamura Kenji is that he makes offbeat and artsy shows that don’t get wrapped up in their own artsyness (the way I feel Masaaki Yuasa shows do). It’s also good to see Nakamura doing something more relaxed after C, which I felt was more or less a failure.

Because indeed, Tsuritama isn’t wielding a heavy animation budget. Like Kuuchuu Buranko and C, it feels pretty cheap, but because it doesn’t have C’s ambitious alternate world or combat scenes, the cheapness doesn’t stand out nearly as much.

On that note, this must be one of the lowest-budget A-1 Pictures shows I’ve seen. Usually they can be counted on for high-quality character art if nothing else, but Tsuritama has more than its fair share of iffy cuts. At least one A-1 Pictures staple is in-tact: all the boys are pretty as fuck.

Yeah, Tsuritama feels pretty gay a lot of the time, but somehow that just makes the whole thing more relatable for me. I am, after all, surrounded by pretty boys in real life, and we’re all gay as fuck, so I can’t even say anything about these guys. What was I talking about?

I like the show, anyway. It reminds me of NieA_7.

Casshern Sins, Heartcatch Precure, and Yumekui Merry all come to mind when I look at Saint Seiya Omega, and not in a good way. I like Casshern and Heartcatch, but the things I like about them aren’t present here; instead, what I hate about Casshern and Merry are what I see.

Two names are important to analyzing these shows: Umakoshi Yoshihiko, who did character designs and animation directing for Casshern Sins, Heartcatch Precure, and Saint Seiya Omega; and Yamauchi Shigeyasu, who directed Casshern and Yumekui Merry. Another person of mention is Hatano Morio, the director of Saint Seiya Omega, who also directed a few episodes of Heartcatch Precure.

END_OF_DOCUMENT_TOKEN_TO_BE_REPLACED

Dantalian no Shoka has been great fun, and watching it inevitably makes me think about Gosick, another light novel-based anime set during the 20s starring a goth-loli. In turn, it also makes me think about the creative voices behind these two adaptions. This post is entirely speculation and fun on my part. It is neither my goal to interpret what the creators of these shows intended, nor to compare the shows in terms of quality. 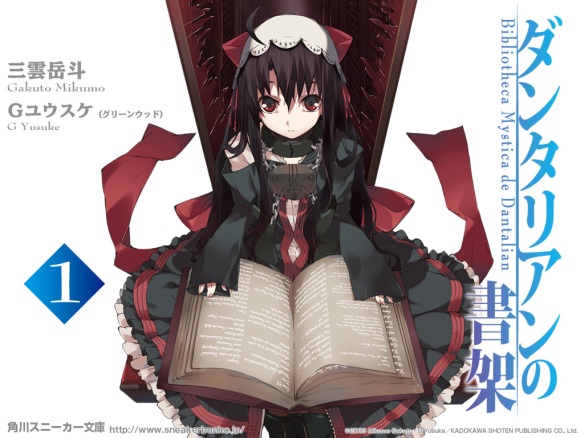 END_OF_DOCUMENT_TOKEN_TO_BE_REPLACED

It’s been said before that Haruhi raised the bar for moe anime, being as it was an ultra high-budget, far-reaching, excellent TV series that was probably the first thing to be all at once so thoroughly moe-centric, so well-produced, and so successful. Haruhi came out in 2006, and since then, there have been many well-produced moe series, especially from the likes of Kyoto Animation, A-1 Pictures, and J.C. Staff (not that everything they do looks as good as Raildex or Toradora). But this post isn’t about how moe anime have gotten all nice-looking and big—it’s about how moe anime are becoming the best-looking stuff on TV, period.

I watch a lot of monthly sakuga AMVs—that is, collections of all the awesome animation tidbits from each month of currently-airing anime. Usually, sakuga AMVs are pretty dominated by shows from studio BONES, which hasn’t been true this season as their only show, No. 6, contains minimal sakuga moments.

So, what shows are putting up the strongest sakuga showings this season? The Idolm@ster (A-1 Pictures), Nichijou (Kyoto Animation), and Hana-saku Iroha (P.A. Works), all moe-heavy shows. The only action show putting up a lot of great sakuga moments is Sacred Seven (Sunrise), which is right up there with The Idolm@ster in quantity of sakuga scenes. But when you watch the videos for July and August, there’s definitely more moe shows with awesome sakuga scenes than anything else. Not to mention all those Usagi Drop scenes of Rin doing cute shit… those count, right?