END_OF_DOCUMENT_TOKEN_TO_BE_REPLACED

I recommend watching the video version of this post, as I use a lot of visual evidence to support many of my points. That said, the text version also has a few little sentences which I had to cut from the video for time. Text version and links below:

END_OF_DOCUMENT_TOKEN_TO_BE_REPLACED

In the year since this site has been primarily text-based, I’ve had an ever-growing tumblr presence. There, where the comment system make no sense, discussion happens through an endless series of reblogs. While this has many disadvantages, it does have one advantage: a comment can be brought to the forefront of discussion. If I make a post, and someone responds to it, I can make another post responding to that comment, and it’s on the front page just like a full post. A lot of people on tumblr hate when I start an epic dashboard-wrecking discussion, but fuck ’em. Also, this isn’t tumblr.

On my last Kill La Kill post, Omo points out that social constructs are a key part of the show’s main theme. After all, it’s set in a world with a rigid class system based on how kids do in school, with a president that has a sort of capitalist(?) view on life. (Only those who fight with everything to reach the top deserve to be there). I wonder if the prez will be asked to, “check her privilege,” at some point, hehe.

AJ the Fourth writes an excellent post on the third episode, similar to my own, but more about how it addresses shame as a social construct. She draws a parallel to Go Nagai’s work, and wonders both if Go Nagai’s decision to draw from the, “culture of shame,” in Japan was his way of being perverse, or if he meant to send a message; and which of those Kill La Kill might be out to do. I’m inclined to say that KlK is not intensely perverted, mostly because it doesn’t feel that way to me. Maybe I’m desensitized, but even Gurren Lagann’s, “ogle this shit,” moments were way more blatant and pandery than KlK’s, which all seem to be in service of something (other than just fans). I could be wrong though, but it’s good that I’m thinking. 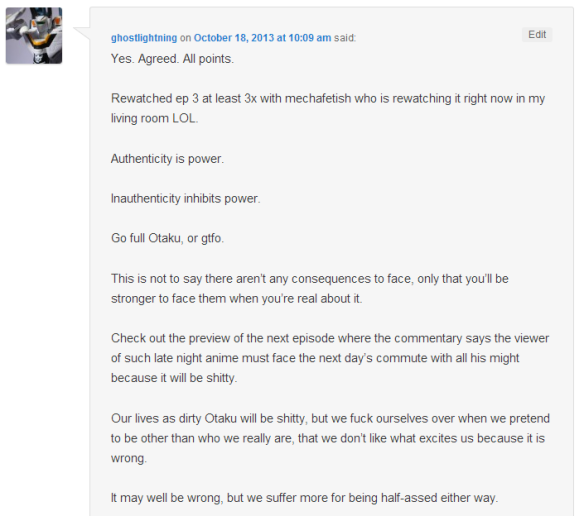 Ghostlightning takes it a step further, citing it as not just a social commentary in general, but a direct commentary on the show’s viewers, i.e. late-night anime otaku. As an aside, the realization that this is late-night anime furthers my point that it doesn’t feel quite so perverse. Nothing has needed censoring so far (or is there more to this, regarding broadcasters or something, that I don’t know?), and considering Gurren Lagann was a Sunday morning show, KlK feeling less-perverse is kinda significant. Again though, I could really just be jaded to fanservice. Maybe it’s the way the show doesn’t shy away or cover up its nudity that makes it feel so much less sleazy than most late-night anime.

But back to ghosty’s point—it’s worth consideration, especially in concert with my own ideas that the third episode was a commentary on the show’s own nature. This is a studio of ex-GAINAX staff after all, who were the self-proclaimed otaku-animators, and whose hot-blooded devotion to the medium is considered an undercurrent in the storylines of most of their shows since Otaku no Video.

The reason I wanted to highlight these comments, even though we’re all basically agreeing with one-another, is to highlight how the subtle differences in our approach suggest our own personalities and what we’re bringing to the table. Ghostlightning and I both have an ongoing narrative in examining authenticity, and it’s interesting to see where he applies it on the personal, viewer level, whereas I apply it on the meta, creator level. Also of interest is how for AJ, the message of episode three was how she came to enjoy the show at all, whereas ghost and I were enjoying it even when the deeper concepts were merely suspicions on our parts.

Throughout the first two episodes of Kill La Kill, I felt that Matoi’s costume design was meant for something a little more than fanservice. It’s not meant to be a commentary on the audience; sure, everyone who ogles her is represented as stupid, and she usually kicks their asses, but Matoi is nonetheless embarrassed to wear it, and there’s nothing to actively punish the viewer for ogling it. The point is more about saying: it’s okay to have a sexy character design; and rather than be coy about it, it should be a matter of pride.

Kill La Kill is utterly absent of pretention. It seeks simply to be an incredibly badass technical action showcase, and it thoroughly succeeds. Hiroyuki Imaishi is perhaps the most influential and important animator in TV anime alive today, and his new studio, Trigger, has brought his style into its own life. Unlike his previous shows Gurren Lagann and Panty and Stocking, which felt like a blend of a huge number of styles from a large group of contributors, Kill La Kill feels focused and uniform in style. It’s also Imaishi’s best directorial work yet in my opinion; the pace is insanely fast, but it’s also very consistent, unlike Gurren Lagann which could feel all over the place at times. In every technical aspect, Kill La Kill is as good as it could possibly be.

The storyline is simple as they come, and the show pulls no punches in being as over-the-top with action and fanservice as it wants to be, not holding back anything for anyone. Episode three is all about embracing that naked, unashamed nature.

Matoi is embarrassed to wear her armor because it’s scantily clad, and guys are ogling her—but she always holds power over them. She knows that they don’t matter, but she lets it upset her anyways. This shame in the very thing that makes her powerful, ends up being her downfall. Not unlike a show or movie created to be an action vehicle, but bogged down in attempted realism or a pretentious/overwrought storyline, Matoi can’t be the epic fighter that she needs to be if she’s busy being ashamed.

The school president, meanwhile, doesn’t give a single fuck. She knows that she’s amazing, and it doesn’t matter what anyone else thinks or says. She’s determined and true to herself—able to stand naked in her conviction and say, “come at me bro.” And in witnessing how the president’s determination trumped the opinions of those beneath her, Matoi is inspired to embrace the nudity that brings her power and fight with true conviction.

…did I just blog anime?!