Of the great pickings this season, the show that’s caught my attention, and that I feel I may actually watch all the way through, is Tsuritama, a low-key show about a bunch of awkward, cute boys learning to fish. Or something.

Here’s a fun fact: Enoshima, the town in which Tsuritama takes place, is fucking tiny. Episode one showed random locations in the city, and lots of mention is made of the fact that the show takes place there (“Enoshima don!”), but I got the best sense of what kind of town it is by looking at it on google maps. (click to enlarge) 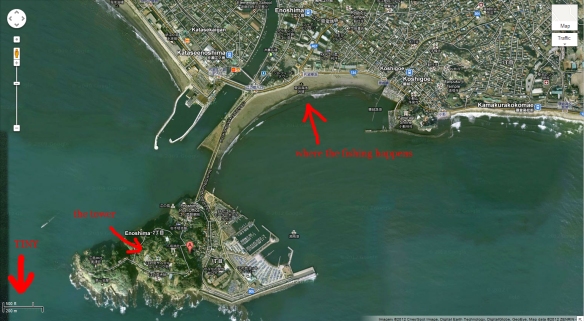 My neighborhood is bigger than Enoshima island. The average SM mall in the Philippines could barely fit on that thing (and artificial island Mall of Asia is actually bigger). Norfolk international airport, which is near my house and is the smallest airport I’ve ever seen, is the size of the whole above screenshot.

I don’t have a point to make about this; I just find it interesting.

Nakamura Kenji is one of my favorite directors, but Tsuritama isn’t like his other shows. Kuuchuu Buranko, Mononoke, and C were a lot more artsy and visually extravagant. Tsuritama nevertheless stands out with its bright and vibrant color palette, which it shares with Kuuchuu Buranko, along with the character design of Irabu-sensei (here seen morphed into the vaguely malicious Coco).

I don’t mind that Tsuritama is less artsy, because the reason I love Nakamura Kenji is that he makes offbeat and artsy shows that don’t get wrapped up in their own artsyness (the way I feel Masaaki Yuasa shows do). It’s also good to see Nakamura doing something more relaxed after C, which I felt was more or less a failure.

Because indeed, Tsuritama isn’t wielding a heavy animation budget. Like Kuuchuu Buranko and C, it feels pretty cheap, but because it doesn’t have C’s ambitious alternate world or combat scenes, the cheapness doesn’t stand out nearly as much.

On that note, this must be one of the lowest-budget A-1 Pictures shows I’ve seen. Usually they can be counted on for high-quality character art if nothing else, but Tsuritama has more than its fair share of iffy cuts. At least one A-1 Pictures staple is in-tact: all the boys are pretty as fuck.

Yeah, Tsuritama feels pretty gay a lot of the time, but somehow that just makes the whole thing more relatable for me. I am, after all, surrounded by pretty boys in real life, and we’re all gay as fuck, so I can’t even say anything about these guys. What was I talking about?

I like the show, anyway. It reminds me of NieA_7.

His name is Oboro, and he is gay.

Gay guys have it rough in anime, just as they do in every other entertainment medium. Sure, gay girls have it rough as well, but at least they generally are portrayed as sexually attractive, get to do lots of cool things, and are occasionally sane. Gay men have not been so lucky; Just look at poor Leeron in Tengen Toppa Gurren Lagann.

END_OF_DOCUMENT_TOKEN_TO_BE_REPLACED

One doesn’t have to look hard to find that Sengoku Basara and Strike Witches have a lot in common. They are both historical period pieces that completely do away with any semblance of accuracy. Both are very straightforward shows that succeed on the strength of their production and the severity of their fanservice. That fanservice, a sort of nudity on the part of the entire show, is what I will now explore.