More EDs! These ones missed the first list for one or more of these reasons: I forgot about them; I didn’t want to include two from the same show; I counted it as not awesome enough because I was being a lazy dick; I haven’t actually seen the anime it comes from but know the ED by reputation.

TO MAKE THIS LIST, if I can actually think of how the song or video goes, it’s got a good bet.

END_OF_DOCUMENT_TOKEN_TO_BE_REPLACED

I tend to miss my blog’s benchmarks. I realized in June that my third anniversary had passed in April, and I’m not sure when I broke 300,000 hits, but I’m already halfway to 400,000. But most of all, I’ve missed my specially-numbered posts, or realized after the fact that I’ve made them. Well, today I was lucky and noticed that this will be my 800th published post! It’s a great mark to have, because 8 has always been a special number to me (I was born on August 8, weighing 8 pounds and 8 ounces) so to mark the occasion, I’ll be listing 8 of my favorite ‘episode 8s’.

8 tends to be an important episode number in anime. In a lot of 26-episode shows, the 8th episode marks the transition from plot set-up to actual movement of events, and will often feature a shocking twist or revelation that changes the way things will happen from there on out. This is a common enough practice that I could make a list of just transitional eighth episodes, but of course, being an important episode doesn’t necessarily qualify as being a memorable and awesome one, so this list will take eighth episodes from any series. The requirement for consideration on this list was that the eighth episode wasn’t just great, but was one of the most memorable or amazing episodes in the entire series. Oh, and you can count on there being spoilers for each episode. 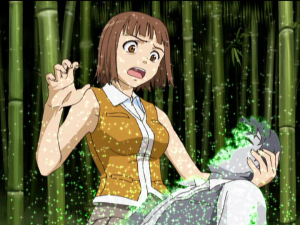 END_OF_DOCUMENT_TOKEN_TO_BE_REPLACED

Okay, so here’s the panel in video in 6 parts. It’s an hour long, so be ready for some time. It takes a couple of minutes to get started and it only progressively gets better. Also the last five minutes were cut off from the tape running out, but they can basically be summarized as ‘GIANT ROBO IS AMAZING’. Anywho, lets go.

END_OF_DOCUMENT_TOKEN_TO_BE_REPLACED

(In case you missed it, go see Part Four: Fighting Spirit over at The Gaming Dungeon.) For our fifth series, we have another beloved cult hit, the 2005 anime Kamichu!, which is one of the coolest slice-of-life-shows around, as well as one of the most well-animated shows of the decade. Let’s have a look!

END_OF_DOCUMENT_TOKEN_TO_BE_REPLACED

We’re three-fourths of the way through “100 Characters For 100 Otaku!” Originally, the series was only going to be five posts long, with each containing twenty characters! I quickly realized this was not possible when I started writing the first post in my notebook, and decided to shorten it to ten posts, but once I transferred it to the computer, I knew it would have to be twenty! Today’s quarry are numbers 30 down through 26, so let’s check ’em out!

END_OF_DOCUMENT_TOKEN_TO_BE_REPLACED

There are plenty of anime out there that felt like they were cut short. Maybe the plot hadn’t fully emerged, or you were just starting to care about the characters before it ended. Maybe the world needed more exploring, or episodes started getting rushed thanks to the time limit. Whatever the cause, we all know certain anime should have been longer.

I am purposefully leaving off anime that has a source material with the exception of #2. That’s because if they only animated a small part of the series, it means they were only doing it to advertise the manga anyway, which you should go read. Therefor, Berserk, Gunsmith Cats, Battle Angel Alita, Claymore, etc. will not be appearing on the list.

END_OF_DOCUMENT_TOKEN_TO_BE_REPLACED

So, I want to do some episodic and/or semi-episodic blogging. However, I have a natural tendency to never watch anything airing, so it’s hard for me. I’d rather episodically blog a show that has already aired, but last time I tried that I made four of this blogs BEST POSTS EVER and got zero comments whatsoever (even with advertising.) So, instead of jumping into an episodic experiment only to get disappointed 3 eps in and stop, I want YOU to decide what show I should blog episodically. Just understand that if you make a request, you have an obligation to comment on the posts in the series!

You are aloud to request any show whether it be already aired, or airing right now, with the only barrier being that I actually want to watch it (to be disclosed after the request) anything I haven’t seen in the past 3 months or at all is fine.

Here’s some shows that I would like to episodically blog myself but won’t without pre-announced interest.

I hope to get some damn responses!