You’ve probably encountered this situation: finding out about an anime, manga, or other part of the culture, and having no way of accessing or understanding it. These are situations that lead some people to learn Japanese or go to Comiket or figure out how to use IRC. I feel a sense of desperation when I know about something like the manga Kesson Shoujo, which no one anywhere can get their hands on; or, to a lesser extent, see a show I like with only one translated episode and know that I can’t comprehend it raw.

These situations are part of why I’m not a completionist. When I got into anime, everything was mysterious this way, because at that time I could only either watch anime on TV (which may or may not have a new episode each week and might abruptly stop airing), or on DVD (when I didn’t have any money to complete shows). I got used to anime being a strange and mysterious entity which I could spend years catching glimpses of before ever seeing in full. Some people have an easy time of getting into things and finishing those things, with only a few pieces that tease them. (For instance, a Gundam fan who easily watches all the shows, only to be irked when they realize that the coolest-looking video game hasn’t been released in their country.) But me, I get into so much that half of all the shit I’m interested in is unavailable or out of reach. 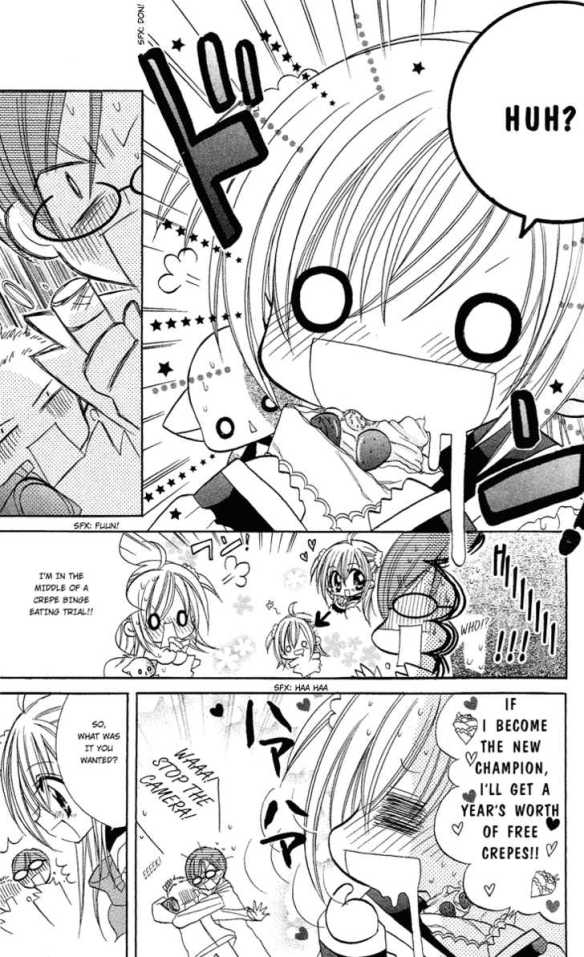 I recently encountered one such example in the form of Kirarin Revolution. I happened to be on Manga Fox, it happened to have just been updated, and I randomly started reading it, surprised to find that I really enjoyed it. For one volume. Then I was snowed out.

According to Manga-Updates, there are no scanslated chapters of Kirarin. This is obviously not true. The first seven chapters on MangaFox are a nice solo effort whose origins seem untraceable. After that, it shifts over to possibly the worst scan job that I’ve ever witnessed. Here’s a page from chapter eight.

Besides the obvious terrors, it's also flipped. And this is the actual size.

There’s no way in hell I’m reading this, so I gave up. Then find out that Kirarin Revolution had a whopping 153-episode anime adaption, so I looked for that. A sub group called Twilight-Paradise had subbed 100 or so episodes before they folded and later re-emerged as a J-drama sub group that no longer hosts their episodes of Kirarin Revolution anywhere. Moreover, all of the torrents that I found were dead. (I have now, however, found that Bakabt has a living torrent of the episodes. Don’t know why I didn’t think to look there before). While searching, I found stream sites that had the show, except the videos don’t exist, most likely as a result of Megaupload’s demise.

Finding the 100 subbed episodes on bakabt proves that it always pays to keep looking for something if you know that it exists in some form, but I can’t get my hopes up that the rest of the episodes will be subbed, nor the rest of the manga scanned in a way that’s readable. There’s also a chance that the anime isn’t as good as the manga. It could end up that I got a one-volume glimpse of something I liked, while the other fifteen volumes remain a mystery to me for years to come.