This audio is not safe for life.

The original post can be read here. This story will be altogether easier to understand if you’ve read my episodic blogging of the first eleven episodes of Madlax.

Fucking Madlax is finally back! I apologize for the extended absence, which had nothing to do with my mom’s health (on the steady incline) and everything to do with my being lazy. That’s all behind us now, so let’s tackle Madlax fourteen! 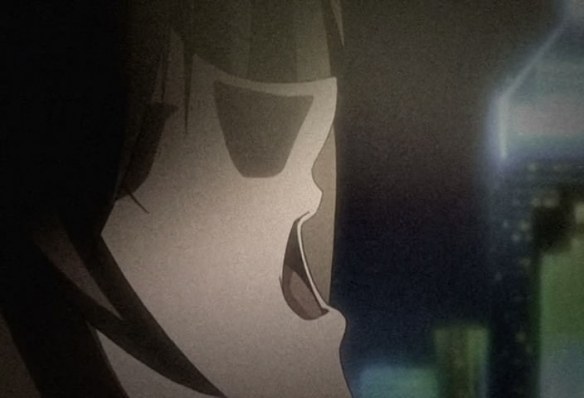 Right off the bat, this episode pulls lame shit very common to anime, though never acceptable; that is, constant replays of shit we’ve just seen minutes ago.

END_OF_DOCUMENT_TOKEN_TO_BE_REPLACED

We’re halfway through! While a few weeks were postponed for one reason or another, today I’ve essentially blogged an entire season of Madlax! (That’s a quarter of a year, for those keeping score.) As I thought, it’s somehow easier to episodically blog a show I hate.

To celebrate reaching the halfway point, I wanted to do something big and special, so here it is: an audio commentary on Fucking Madlax episode thirteen! 22 minutes of bad anime, my droning voice, and retarded on-screen captions. I hope you enjoy it!

My excursion from Nafrece, land of my heart, taken form in the beauteous cuteness that is my young lover, ever slightly absent of mind but never so of my adoration, even as I quiz the nature of the shape-shifting snakes that are her follicle dilemma, was to be a trip purely of business, neverminding the vicarious excitement of co-workers gushing that Gazth-Sonika is the paradise of this world. Yet while the mildly impressive beauties of the middle-upper-class metaphorical eden indeed delighted an otherwise somber effort in search of truth, ’twas a beauty wholly of the flesh which scorched my heart that I might even for a while forget my true love’s face whilst tangled betwixt bedding comforts and the ample thighs of a mercenary. 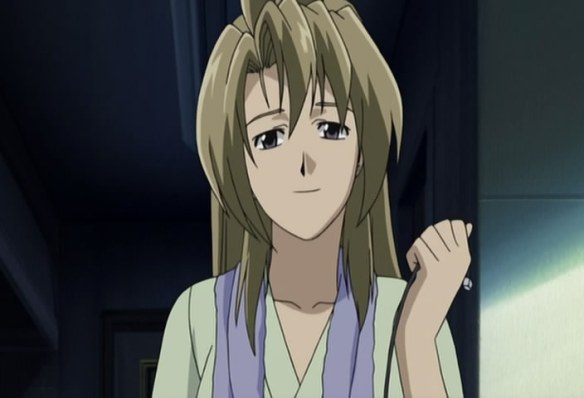 Her name alone might drive me MAD, so intensely that the breakdown of my constitution constitutes an utter loss of faculties, resulting in a fetid stream of excrement expelling itself from my body as though I’d been treated to a box full of LAXatives. I dare utter it only between the lines, for fear that if placed upon them, it may take my mind away again.

She was a lit stick of dynamite thrown in my face. An eldritch abomination slithering from the depths of hell up into my hotel room. There for my protection, though she might’ve killed me through all those times she took my breath away (without mention of the times her humble services flatly failed to accomplish anything). From the moment I laid eyes on her, my advances were stunted only by a putrid aura emanating around her—I sent her to the shower as soon as we got to the room.

While she was occupied, I contacted my informant, the one who had insisted upon a mercenary for my protection.

“Have you regrouped with her?” he asked.

“She has a mullet.” I responded.

Before the conversation could proceed, my correspondent was suddenly silenced. I spun to react, meeting with the woman fresh from the shower. As per my fear, the removal of her stench had not stayed the onslaught of bestial hideousness, but in this state she was approachable.

I went straight to business, pouncing forward and shoving her sturdy body back onto the bed—knowing as I did that for it to budge, it only could have caved willingly. Opening the drapery of her shower gown, I dug the cavernous depths of her ample, unyielding thighs. It felt like hours upon suffocating hours of battling a continuous onslaught of flesh before I emerged upon her glorious muff.

It hung broad and loose like the sleeve of a wizard, gaping and breathing like a tunnel beckoning the car of my fist to drive through—perhaps my entire arm. Even my foot wouldn’t have met much resistance. Her clitoris was Moby Dick in the ocean of her vulva—as massive as it was strangely elusive. With all the spirit of Ahab, I thrust the spear of my tongue upon it. This generated the first of near constant waves of liquid crashing against the helm of my cheeks. There simply was no end to it.

All the while, she never moved nor made a sound. Only when I sought brief respite and a grasp of precious air did I catch a glimpse of her satisfied face, full of modest approval.

“That was nice,” she said. And then she rose from the bed, reminding me that she had to get dressed and get to work.

I knew she had to go, but I couldn’t let her. Upon her completed dressing, I shoved her unto the couch and began touching her all over (and much over there was to be touched, might I add). I lost myself in her, imagining only the sensation that I fantasized her feeling, unlikely as it might’ve been that she could feel anything. A couple minutes of that and then she shoved me off, again with a smile saying, “I appreciate it, but I’m busy.” Finally, I allowed her leave.

Night fell whilst I remained transfixed upon the bed, all day touching myself and thinking of the rolling mountains and rough, flame-scarred plains of that unforgettable body. And then, finally, a sound! My demi-goddess of Hell had returned, and started to undress, ready to sleep on the couch. Surely this was a tease! 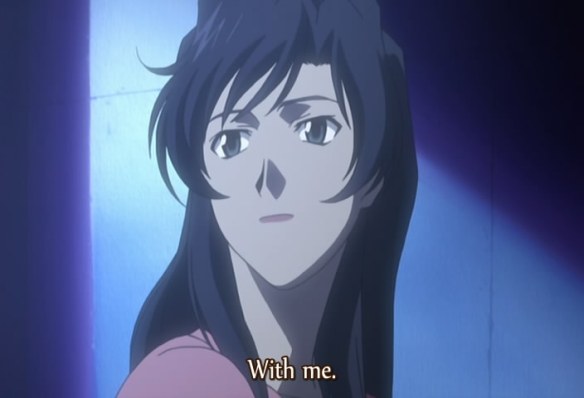 She obliged. Three infinite hours, the blackest shadow play we acted out in the moonlight, constant growls and barks in passion and rage, our bodies crushing and smushing one another. Before long, I was covered in bruises, suspecting a fractured rib and busted lip. Every limb was soaked in vagina filth from constant curiosity over just how much I could fit inside that void of her crotch. Our demonic dance only dwindled to a halt when no part of my body remained capable of movement.

Basking in the afterglow, my head full of fuck, I asked. 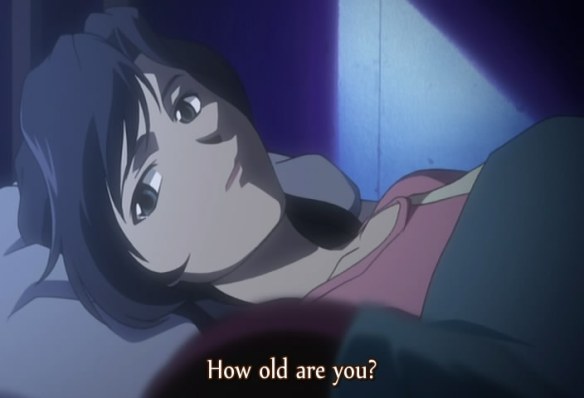 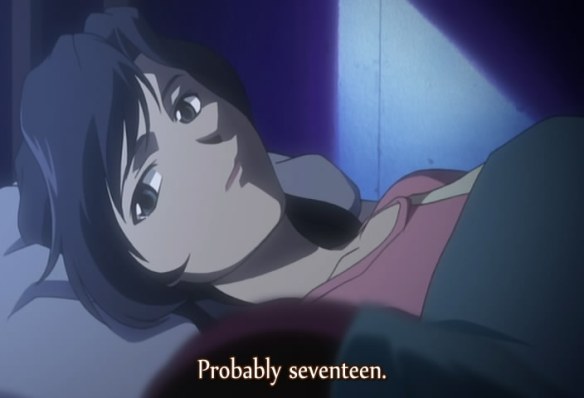 Ah, what a thing I had done, to forget my true love in throws of horrendous, passionate battle against another the same age as she. Though filled with shame, tears welling in my eyes, I knew that I had followed the true intentions of my heart. I regretted nothing.

I know not what became of the monstrous woman. She faded in the night like the terrors thereof which she so resembled, and by morning and my waking, she was nowhere to be found. I never saw her again. The next night, my flight back to Nafrece was waiting. I decided to forget all which occurred on that night and speak not of it again. 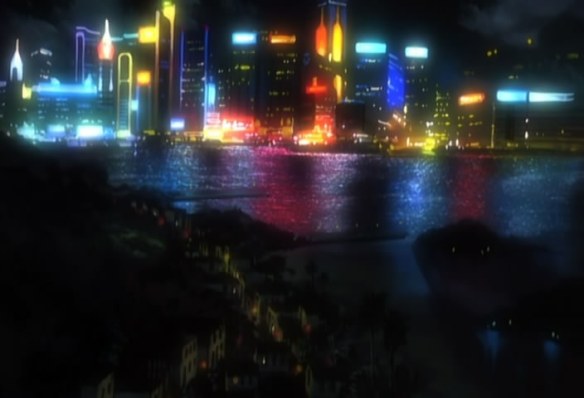 The night is long in Gazth-Sonika.

~The Mullet and the Muff, end~

Audience reactions to The Mullet and the Muff. 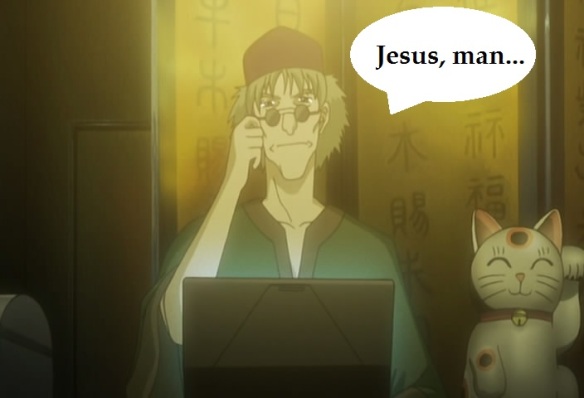 In all seriousness, I genuinely enjoyed this episode. Whereas episode seven stood out as a good episode for Madlax, this was simply a good episode. There were lots of lesbian overtones, some really stand-out moments (especially the beginning of Madlax’s confrontation with the sniper bitch), and for once, the fight used an element of tactics to be interesting, which works way better with this shitty animation than straight-up action scenes. And the animation wasn’t as bad as usual in this episode, either.

I seriously fucking doubt she has that high of a success rate.

Just because it was a great episode doesn’t mean that nothing stupid happened, but I’m willing to forgive all of that because stupid stuff happens in almost all anime. Ordinarily, I’m very forgiving of stupid stuff—it’s only when the stupid stuff reaches overwhelming levels and is coupled with crappy visuals that I feel the need to rage about it.

When Madlax says something stupid like this, it doesn’t bother me because this scene is well done. Whereas the rest of the show had me making fun of sniper girl for being worthless, this episode did enough to show her as ruthless and dangerous that her threat became real during the fight, and I was willing to buy that she might be good enough to sense presence or whatever stupid shit. I wasn’t even really all that pissed when the fight ended with Madlax needlessly sparing her yet again.

I’m not going to get my hopes up that this show might be good in the next episode, because I made that mistake with episodes seven and eight. Tune in next week to see how it turns out!

This week’s episode was a continuation of last week’s Vanessa/dicking around on computers arc. As such, it was equally boring and absolutely nothing happened, so I did another of these Ugly Fucking Madlax comic things. This one also comes with a video!

Apologies for the lateness. Last week my town was hit by a hurricane, which was incredibly lame but nonetheless distracting. As for missing .hack//SIGN on Friday, that was from the follow-up natural disaster of discovering Homestuck and taking four days to read all of it. But I’m back now!

This week, I’m trying something a little different. The format I’m using doesn’t work well with the site’s thin columns, so instead I ask that you follow this link (presented in glorious Comic Sans) for the rest of the post:

Yesterday snuck up on me—until now, I’d watched all of and written about most of these episodes long before the posts went up, so now that I’ve slacked until it caught up with me, I’m late. Good thing I don’t have anything to say about this episode.

END_OF_DOCUMENT_TOKEN_TO_BE_REPLACED

My Sword Is Unbelievably Dull