This’ll be a short one, because Natsume Yuujinchou is delightfully iyashikei, and I feel like I couldn’t talk about it properly if I weren’t just being chill about it.

I decided to watch Natsume Yuujinchou as part of my current plot to watch everything Takahiro Omori has directed (with the exceptions of his kids shows and Hell Girl.) No Name and I sat on the couch and watched both seasons over the course of 2 days, but it didn’t so much feel like watching anime as it did just letting the anime wash over us.

NatsuYuujin is very relaxing – sometimes, maybe too relaxing, as my mind would wander off in the middle of an episode if I wasn’t careful. I got a  sensation of ‘waking up’ after each episode, wherein I’d feel like all of my blood had coagulated in the back of my head, and my eyes were out of focus (actually, my eyes were out of focus, but that’s because my eyes are broken, and had nothing to do with the show.) No Name stated before we began that he’d probably cry at various points during the show, since he’d remembered doing so before, and indeed, I’d seen others report the same back when the show was airing, but he surprisingly didn’t cry at all. Even when the series got emotional, it was less of a pressuring emotion, and more of a soothing emotion.

NatsuYuujin has a thick layer of melancholy and loneliness about it, like sitting in a windowsill on a rainy day when you wanted to go outside. It’s not a bad feeling persay, but it made me reflect on my own brand of loneliness, and made me want, like Natsume does, to make connections. Which is also why it’s so satisfying when Natsume spends the whole of the show forging connections and friendships and coming out of his shell. 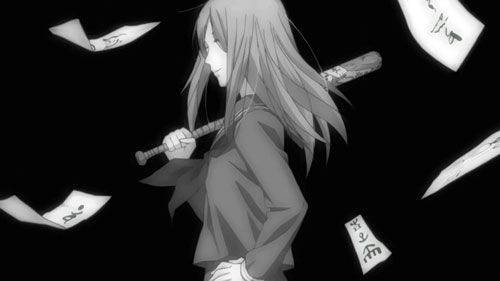 Natsume has a hard time making friends because he’s been traumatized by people in general throughout his life, but it’s easy to see that everyone cares about him beyond just trying to protect him like he tries to do for them, and over time, it becomes clear that he can really create those mutual relationships.

Natsume is an excellent male lead, because he’s able to be emotional without being useless. He’s a great kid and would be an awesome friend, but he hasn’t learned to trust people, and he shields himself off completely – it’s up to the rest of the cast to help him through it, but that also brings us to another great part of the show, in that Natsume really isn’t ‘close’ to anyone. There’s a certain level of distance between him and the people who would probably call him their friend.

Nyanko-sensei (voiced superbly by Kazuhiko Inoue), his would-be partner, tries to act like they aren’t friends, and like he’s just waiting for a chance to eat Natsume and take the book of friends, but in truth, he’s fallen for Natsume, and really does care about him as a friend. There’s a point in the second season where Natsume realizes that in Nyanko-sensei’s long life, he must’ve seen all the humans that he tried to get close to die, and probably doesn’t try to get close to humans anymore because of it. One of the coolest moments at the end of the show is when Nyanko-sensei stops being tsundere for a moment and tells Natsume that he’ll do his best to enjoy this ‘brief moment’ that is Natsume’s life. 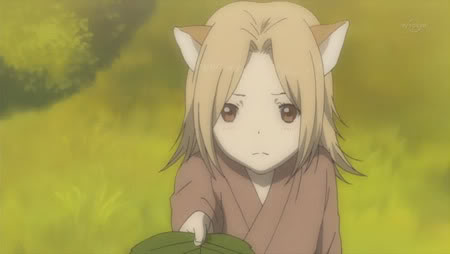 NatsuYuujin has a great cast of supporting characters who, by the way, are Gay Beyond All Reason (Or ‘GayBAR,’ as I like to say). Natori Shuuichi was the most frequently re-appearing character, the self-proclaimed “fabulous” actor/exorcist. Natori made a lot of unmistakable passes at Natsume, and it’s all the more believably gay when he’s voiced by Akira Ishida, the ultimate ambiguously-gay voice. I watched this right after Gakuen Alice, wherein he played the even-more-fabulous Narumi-sensei, and I couldn’t stop thinking about the connection while I watched the show (I will say, however, that Natori wasn’t as charming as Narumi-sensei). I also enjoyed Natori’s Satsuki Yukino-voiced vassal, but I don’t have a further comment on her.

The straightest character in the show was the Miyuki Sawashiro-voiced Iinchou, but her many attempts to ride Natsume’s Yuujinchou were thwarted as Natsume counted on his friends to find every way of getting rid of her. The high-point of gayness in the series was when Natsume’s friend Tanuma (I think?) spends most of episode 13 (S1) getting rid of the Iinchou at the summer festival so that Natsume could handle his youkai issues/spend all of his time with Tanuma. Which, in some roundabout fashion, brings me to my favorite character in the series. 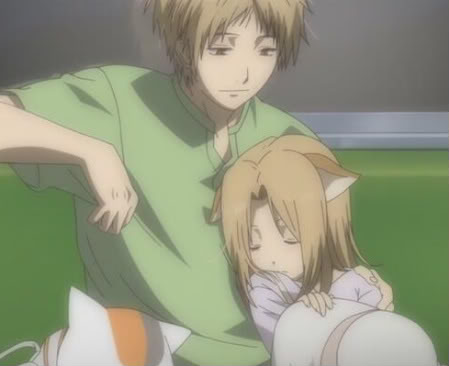 And by 'youkai issues' I mean 'shota love'~

Which was the Yajima Akiko-voiced kitsune (I don’t believe he had a name), who was put in the series as a terrorist plot to make me into a shotacon. There’s really no excuse here – regardless of dressing, acting, and having the voice of a girl, I knew that the kitsune was a boy from the first minute he was on-screen, and then I spent the rest of that episode and the last one ‘squeeing’ over him. If that wasn’t bad enough, there’re at least two more adorable shotas who get attached to Natsume in the course of the series (thankfully all of them are centuries-old youkai, though), but kitsune was still my favorite. It’s amazing how this show managed to turn the moe up to 11 when it came to the traps, and there was also a ridiculously-adorable little girl who showed up briefly in a couple of first-season episodes. However, nothing even compares to the ‘baby dragon’ from season 2, for whom No Name and I both cried “SO MOE I COULD DIIIIIIEEEE!”

SO MOE I COULD-

I don’t think there’s much more to say. There were great episodes and moments and characters all throughout the show, but it’s just so iyashikei that I can’t do them real justice by talking about them instead of urging you to watch the show. If I could describe my feelings towards the series in one word, it’d be ‘yukkurishiteitene!’

(By the way, this post title is a reference to one of Ben Yahtzee Croshaw’s Zero Punctuation videos. I can’t remember which, though.)